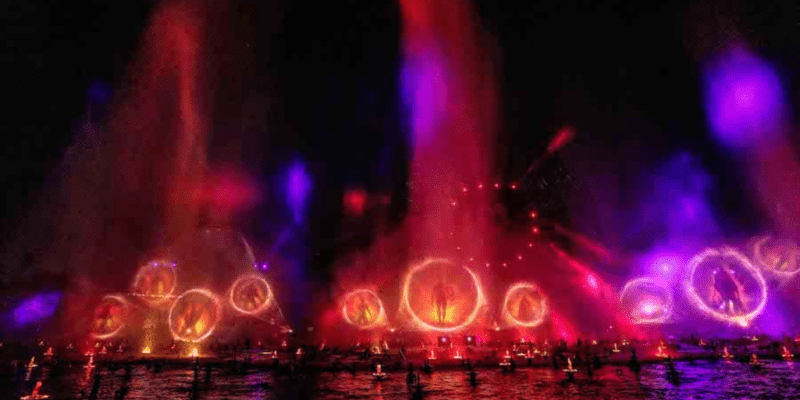 The Walt Disney Company’s centennial is almost here, bringing company-wide celebrations, events, and more for all fans to enjoy. While the decision might reignite a heated debate among Disney fans, Disneyland Resort in Anaheim, California, will be the heart of these celebrations, beginning January 27 and bringing all sorts of magical offerings to the California theme park.

Disneyland Resort will welcome two brand-new nighttime spectaculars as part of the Disney100 celebrations, and the company just shared a first look at one of them, featuring stories from the Star Wars franchise, the Marvel Cinematic Universe, Pixar stories, and more! Are you ready to take a peek?

World of Color – ONE will debut at Disney California Adventure on January 27. The new Disney nighttime show brings an inspiring message that illustrates the storytelling legacy of Walt Disney, which began a century ago, in a remarkable production by Disney Live entertainment.

Per Disney Parks Blog, “World of Color – ONE celebrates how a single action, like a drop of water, creates a ripple that can grow into a wave of change. You’ll discover how it only takes one action to make an impact on the people in our lives and the world around us, just as one man – Walt Disney – started the wave that has continued to grow and inspire people around the globe for 100 years.”

The new nighttime spectacular features some of the most courageous, loving, and inspiring characters who dared to be wavemakers and change the world, making World of Color – ONE the first Disneyland Resort nighttime spectacular to feature characters, music, and moments from Walt Disney Animation Studios, Pixar Animation Studios, the Avengers, and Star Wars in the same production.

World of Color – ONE will feature moments from fan-favorite films, including The Lion King (1994), Moana (2016), Mulan (1998), Coco (2017), Soul (2020), and more, coming to life on an immersive water screen that can span up to 380 feet across. The nighttime spectacular will also feature a heart-stirring musical score comprised of 18 different compositions, including a new, original song — “Start a Wave” —written by Grammy-nominated artist Cody Fry, with lead vocals performed by singer-songwriter and actress Loren Allred.

Water will play a starring role in transforming Paradise Bay during the show, in addition to being a driving metaphor to the story of World of Color – ONE, as each scene is brought to life by mist screens and 1,200 dancing fountains, combined with brilliant lighting, projection, laser, fog, and flame effects. And Guests wearing their MagicBand+ will experience another dimension of storytelling, as their bands will enhance the effects with synchronized dancing lights and vibrations.

Disney adds, “This immersive journey builds to an emotional and uplifting finale that highlights how, when we come together and combine our efforts, many drops can become an ocean. You’ll walk away feeling inspired to start a ripple of your own and be the one to make a wave for the future.”

Disney shared a first look at some of these scenes in a video you can see below:

If seeing a few seconds of this upcoming nighttime spectacular brought tears to our eyes, we can only imagine how emotional and impressive World of Color – ONE will be when it debuts at Disney California Adventure on January 27.

When World of Color – ONE debuts, Guests will be able to access viewing areas for the show through a virtual queue system available only via the Disneyland app, with distribution beginning at noon, daily (subject to availability), and exclusively for Guests who have entered Disney California Adventure for the day. You can click here to learn more about Disney’s virtual queue system for this nighttime show. Additional viewing for each performance is located around Paradise Bay on a first-come, first-served basis.

As of this article’s publishing, Disney states that World of Color – ONE will have two performances on weekends — 9 p.m. and 10:15 p.m. on Fridays, Saturdays, and Sundays — and one nightly performance on weekdays — 9 p.m. Monday through Thursday. It is essential to mention that showtimes are subject to change.

Are you excited about the debut of World of Color – ONE at Disney California Adventure? Will you visit Disneyland soon to enjoy this nighttime spectacular? Let us know in the comments below!