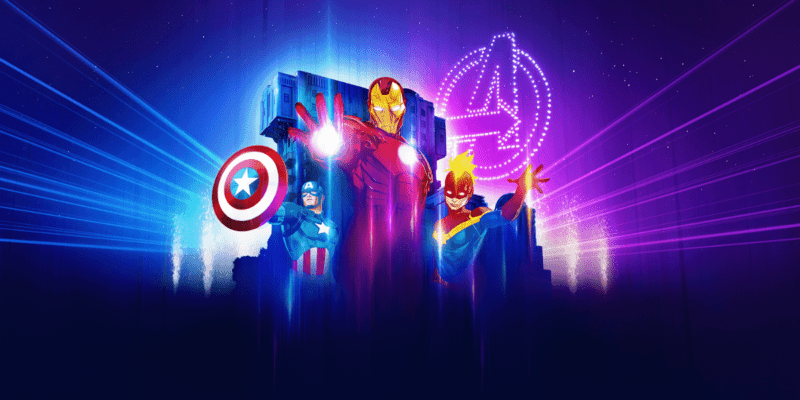 The Marvel Cinematic Universe continues to have a prominent presence at Disney Parks worldwide, bringing some of the most breathtaking offerings for MCU fans to enjoy, including interactive attractions bringing them into the action with Avengers-level threats, heroic encounters with their favorite characters, and of course, the opening of Avengers Campus at Disneyland Resort and Disneyland Paris, letting fans become heroes (or villains) for a day on a fully-immersive experience throughout the all-new land.

While Disneyland will soon debut a brand-new nighttime spectacular featuring characters from the Marvel Cinematic Universe, the Star Wars franchise, and more, and Walt Disney World just announced the return of the fan-favorite fireworks show Happily Ever After, the two Disney Parks will be put to shame by a brand-new nighttime show featuring up to 500 drones lighting up the sky over Disneyland Paris, bringing the Avengers to life.

“Avengers: Power the Night” will be a brand-new show arriving at Walt Disney Studios Park on January 28 and is set to be the first nighttime drone show dedicated entirely to the Avengers and the Marvel Cinematic Universe. The show will reportedly have daily performances and will combine music, lights, pyrotechnic effects, video projections, and up to 500 drones that will form an awe-inspiring series of icons representing the powers of iconic superheroes, including Captain America, Captain Marvel, Hulk, Scarlet Witch, Doctor Strange, and, for the first time at Disneyland Paris, Shang-Chi.

The new show will be projected directly onto The Twilight Zone Tower of Terror, located just outside Avengers Campus at Walt Disney Studios Park, which will be the main canvas for the show featuring the video-mapped projections and launching firework effects.

You can see the exclusive teaser for the new drone show, featuring some of the processes to bring it to life, in the video below:

“Avengers: Power the Night” will be available nightly at Walt Disney Studios Park from January 28 through May 8, 2023.

When Avengers Campus opened at Disneyland Paris in 2022, the Parisian Disney Park featured an amazing drone show which, given this new announcement, could’ve been the preparation and rehearsal for this breathtaking nighttime spectacular.

During last year’s Disney D23 Expo, Disney announced plans for a massive expansion coming to Avengers Campus at Disneyland Resort, with a breathtaking attraction making its way into the immersive land, and we can’t wait to learn more about the upcoming project!

Are you excited about this all-new show coming to Disneyland Paris? Would you like to see Disneyland Resort and Walt Disney World add drones to their nighttime spectaculars? Let us know in the comments below!