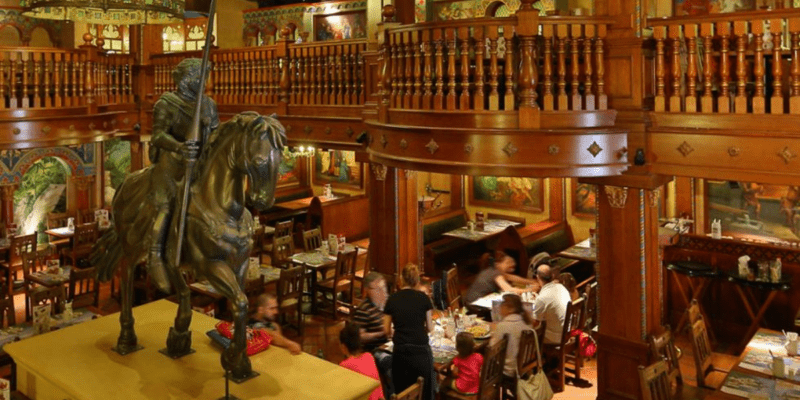 Disney is officially replacing an iconic restaurant as part of a massive transformation. Here’s what we know of the upcoming location.

Disney Parks are constantly changing, welcoming new attractions, upgrading existing offerings, and undertaking titanic new projects to bring new lands, expansions, and experiences for Guests of all ages to enjoy. Part of these changes is the massive transformation of the Disney Village at Disneyland Paris — the Parisian Disney Park’s shopping and entertainment district, which will officially replace a popular restaurant with an all-new concept set to welcome Guests in early 2023.

Disney just announced the closure of King Ludwig’s Castle restaurant and bar at Disney Village, making way for an entirely new concept, The Royal Pub. This new location will serve the best of traditional English fare and will be operated by renowned Groupe Bertrand, a Resort’s longtime partner who manages other locations in Disney Village and some famous restaurants in Paris.

The Construction teams in charge of the project will give the location a fresh look with updates to the terrace and facade, including a new entrance, a renovated bar area, and an updated inside atmosphere.

Whether you’re craving tasty finger and comfort food, with a great selection of craft beers, all-day breakfasts, generous fish & chips, Guinness-braised beef, authentic pies, flatbreads, toasted sandwiches, and salad bowls, or the yummiest desserts in town, you won’t want to miss The Royal Pub and its warm and lively ambiance during your next visit to Disneyland Paris.

Fans of King Ludwig’s Castle will be able to enjoy a last-chance opportunity to experience it before its closure on January 8, 2023. And Guests eager to enjoy the first bite at The Royal Pub can do so when the new concept opens in February 2023.

Recently, Guests could see the exterior of the Rain Forest Cafe at Disney Village destroyed, with the location possibly closing permanently at the Parisian dining and entertainment district. Planet Hollywood also announced its permanent closure scheduled for January 7, 2023. With all these changes, saying Disney Village is receiving a complete remake would not be an understatement.

Disney is apparently focusing on bringing new dining experiences for the remainder of this year and early 2023, as the company recently announced the opening of an all-new restaurant hosted by Donald Duck — Donald’s Dine ‘n Delights — opening this winter and an opening window for the world’s first Toy Story-inspired table restaurant.

Have you visited Disney Village in Disneyland Paris? Are you excited about this new restaurant arriving in 2023? Let us know in the comments below!