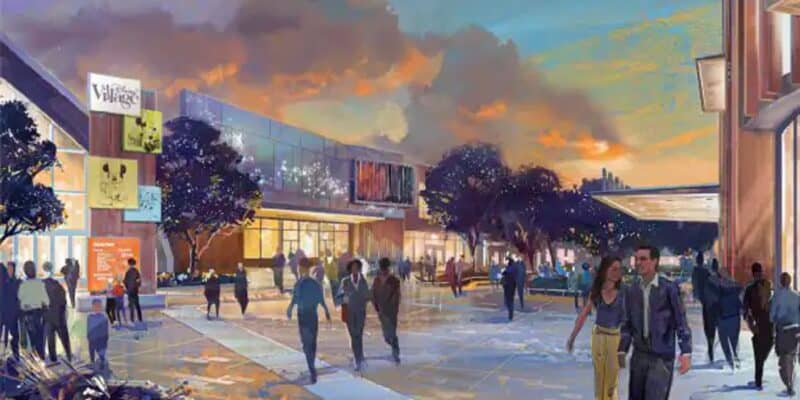 Disneyland Paris is celebrating its 30th anniversary this year, and with this celebration comes a huge transformational project.

This project centers on the reimagining of Disney Village, which is Disneyland Paris’ dining and entertainment district, similar to Disney Springs at Walt Disney World Resort or Downtown Disney at Disneyland Resort. This transformational undertaking was announced in March and will start with the newest addition of Rosalie, a French brasserie.

To get a better understanding of the motivation behind this project, Disneyland Paris released an interview with Imagineers on this project – Jean-Marc Mounet, Senior Project Manager, and Greg Ashton, Executive Architect.

So why are Imagineers transforming Disney Village in the first place? According to the interview, this is an opportunity to rethink the design of this area to have a better sense of consistency, as it has evolved substantially. Although Disney Village will remain a dining and shopping district, it will continue to embrace the magic of Disney storytelling in a more artistic, modern style.

Related: Inside the Magic of Disneyland Paris

“As originally conceived, Disney Village was a much smaller location and was subsequently added to in stages. Some of those additions sometimes compromised flow and connections with our offerings. Our team was given an opportunity to look at the development as a whole and were able to make several thoughtful, strategic changes to the existing infrastructure that will significantly and positively impact the guest experience.”

But, unlike the Disney Parks’ other well-known shopping and dining districts, Disney Village will keep its French identity and focus on the Parisian culture. Ashton remarked:

“Our team was less inspired by a single, specific place, but more by the vibrant and active lifestyle that Parisians seek out. Our challenge is how to integrate that within the context of Disneyland Paris and how to make it work year-round.”

Although the French culture will be a large portion of this reimagined area, Disney storytelling will still be at the heart of this section of the Resort, offering an immersive experience to Guests and giving them that easy transition and an opportunity to continue their Disney experience even outside the Parks. Ashton provided more insight into this approach:

“Our approach at Disney Village is more celebratory of the stories and experiences our guests cherish.”

Ashton also mentioned that this Disney magic will include “lights, music and a series of unique art installations that represent our characters and stories in contemporary styles.”

“The landscape is what threads Disney Village together. This cohesive approach will enhance the overall identity of Disney Village and ensure that the space is easy to navigate with plenty of places to relax.”

So what’s next in this transformation? Jean-Marc Mounet revealed that the team is already working behind the scenes to get these projects up and running, which include Rosalie, as well as a new facade on Disney Fashion Junior. Mounet shared further:

“The true start of the overall transformation is the construction works for the new French brasserie Rosalie, which we aim to kick off in January 2023.”

“This [Disney Fashion Junior facade] will be the first of many new façades on the whole street. Due to its specific condition on this side of the building, with the arcade, it will also serve as a ‘first article,’ to help Imagineering adjust the design and all the construction process for the future portions.”

When asked about what brings such a creative vision to life, Mounet shared that it takes a village:

“Transforming an existing infrastructure is not only a challenge from a design and development standpoint. It also requires taking all conditions into consideration, including the fact that the streets will remain open to guests throughout the entire transformation process! To make sure Disney Village caters to all current and future guests’ expectations, our project team involves creative forces like Imagineering, but also several Disneyland Paris operational and support teams.”

Are you looking forward to seeing the reimagined Disney Village at Disneyland Paris? Share your thoughts in the comments!