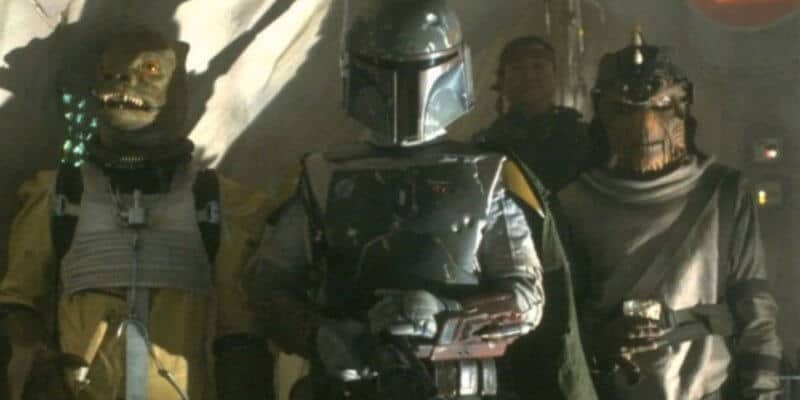 Since The Mandalorian Season 2 concluded in December 2020, Star Wars fans have been anxiously awaiting another live-action series.

While Marvel fans got four live-action Marvel Cinematic Universe shows — WandaVision, The Falcon and the Winter Soldier, Loki, and Hawkeye — in 2021, the Star Wars fandom had only two animated series, Star Wars: The Bad Batch and Star Wars Visions, the entire year to date.

Now, though, the first Mandalorian spinoff series, The Book of Boba Fett, is set to debut on December 29, and excitement for the project is ramping up as its premiere date approaches.

**POTENTIAL MAJOR SPOILERS FOR THE BOOK OF BOBA FETT BELOW**

Although there have been rumors that Qi’ra (Emilia Clarke) — Han Solo’s former lover who is determined to climb the ranks of Darth Maul’s Crimson Dawn crime syndicate in Solo: A Star Wars Story (2018) — will be back in The Book of Boba Fett, a new reported leak indicates that she will play a key role in the project, along with a somewhat surprising partner, Fett’s former mentor Cad Bane.

Bane, a fan-favorite Duros bounty hunter modeled after Wild West bandits, first appeared in George Lucas and Dave Filoni’s Star Wars: The Clone Wars and went on to have story arcs in both Star Wars Rebels and The Bad Batch, in which he clashed with Fennec Shand (Ming-Na Wen), who has been serving as Fett’s (Temuera Morrison) righthand woman since Season 1 of The Mandalorian.

Even though 30 years have passed between The Bad Batch and The Book of Boba Fett — which is set in the “Mando-verse” about five years after Star Wars: Episode VI – Return of the Jedi (1983) — this leak purports that Bane hasn’t slowed down much, and will be aiding Qi’ra throughout the seven-episode series.

Main antagonist is Q’ira played by Emilia Clarke. An elderly Cad Bane is her right hand man, Cad Bane is played by one of the Mando stuntmen but is voiced by Corey Burton, looks cool in live action. The duo are the big bads of the series.

Boba goes around uniting the Mad Max-esque gangs and minor syndicates who are at each others throats after Jabba’s demise. Crimson Dawn at the same time are trying to gain a foothold on Tatooine. They view Boba as a threat and send various bounty hunters after him, including Black Krrsantan the Wookie

This is intriguing, as it seems that Fett is finally being cemented as more of an antihero than a villain within the Star Wars franchise. This has, of course, been a topic of much debate among Star Wars fans for decades, since the legendary bounty hunter first appeared — while aligned with both Darth Vader and Jabba the Hutt — in Episode V – The Empire Strikes Back (1980) and Return of the Jedi.

Although most details about The Book of Boba Fett remain unconfirmed, including the live-action appearance of Cad Bane, we do know Bib Fortuna (Michael Carter) is dead and we’re stepping into a Tatooine underworld seemingly controlled by a vengeance-filled Fett.

Mandalorian showrunner Favreau has billed the series as “The Mandalorian Season 2.5″ and Book of Boba showrunner Robert Rodriguez recently promised his episode — “Chapter 14: The Tragedy” — of The Mandalorian was “nothing” compared to what is coming next in the Star Wars galaxy.

In addition to Grogu’s reported appearance, many fans are hoping for cameos by Pascal’s Djarin, Timothy Olyphant’s Marshal Cobb Vanth, and, of course, Harrison Ford’s Han Solo — CGI, obviously — Rodriguez and other members of the crew have yet to confirm any details regarding special appearances by Star Wars fan-favorites.

Are you looking forward to The Book of Boba Fett?