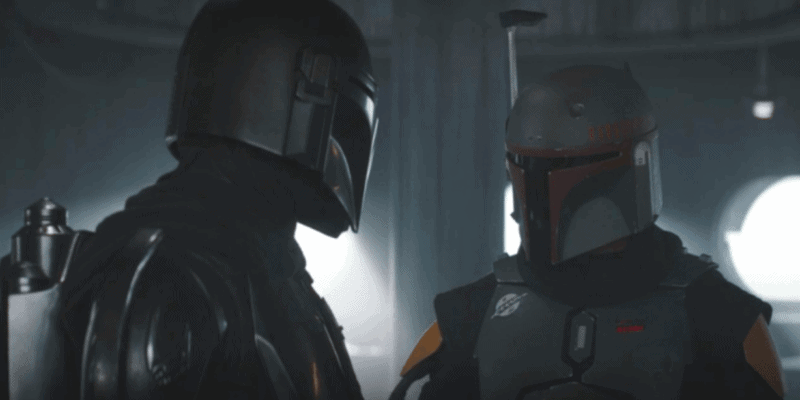 When Peyton Reed’s The Mandalorian Season 2 finale episode (“Chapter 16: The Rescue”) aired, Star Wars fans were left coping with a lot of changes.

In addition to the fact that Grogu and his “father”, bounty hunter Din Djarin (Pedro Pascal), were split up for the first time since we met them in 2019, Mandalorian viewers had to process the fact that Jedi Knight Luke Skywalker (CGI Mark Hamill) returned to the Star Wars story during the original trilogy era — and he doesn’t seem to be going anywhere anytime soon since he became Grogu’s new Jedi Master.

Skywalker swooped in with his X-wing — and a green lightsaber — just in time to save Grogu and Djarin, Cara Dune (Gina Carano), Fennec Shand (Ming-Na Wen), Bo-Katan Kryze (Katee Sackhoff), and Nite Owl warrior Koska Reeves (Sasha Banks) from Moff Gideon (Giancarlo Esposito) and his squad of Dark Trooper droids, who have a decidedly take-no-prisoners attitude.

Then, as if that wasn’t enough to handle, a surprise post credits scene was followed by the words “The Book of Boba Fett – Coming December 2021″.

For anyone who has ever seen Star Wars: Episode VI – Return of the Jedi (1983), the scene took place at a very familiar Tatooine location — Jabba the Hutt’s palace. It featured bounty hunter Boba Fett (Temuera Morrison) and Wen’s Fennec Shand, who have now been confirmed to be the stars of The Book of Boba Fett.

Although we don’t know many details about the upcoming “Mando-verse” spinoff series — which Mandalorian showrunner Jon Favreau has billed as “The Mandalorian Season 2.5″ — except that Bib Fortuna (Michael Carter) is dead and we’re stepping into a Tatooine underworld seemingly controlled be a vengeance-filled Fett, showrunner Robert Rodriguez recently promised his episode — “Chapter 14: The Tragedy” — of The Mandalorian was “nothing” compared to what is coming next in the Star Wars galaxy.

In August, Rodriguez also promised the show would “over-deliver”, seemingly incredibly confident that the fan base will love whatever is coming down the pipeline ahead of The Mandalorian Season 3 and Ahsoka in 2022:

“[I] can’t say anything about it at all right now, but it’s coming out in December … Wait until you see what’s coming. It’s going to blow your mind. That’s all I can say. I can talk it up all I want, because I know it over-delivers. It way over-delivers. People are going to be so pumped when they see it.”

While many fans are hoping for cameos by Pascal’s Djarin, Timothy Olyphant’s Marshal Cobb Vanth, and, of course, Harrison Ford’s Han Solo — CGI, of course — Rodriguez has yet to confirm any details regarding special appearances by Star Wars fan-favorites.

Are you looking forward to the “next chapter” of The Mandalorian?