Unexpected Things Fans Want Banned at Disneyland - Inside the Magic 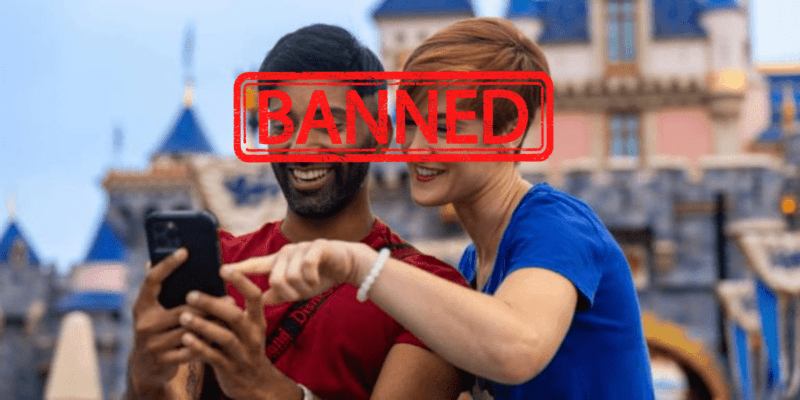 Disneyland Resort and Walt Disney World Resort have rules that every Guest is expected to follow. As societal norms change and technology advances, these rules are changed to better suit Guests’ safety.

Of course, Disney Cast Members can’t be everywhere at once. Rules are stretched and broken, and other Guests wonder if they should step in. Some have been rewarded for doing so, while other confrontations have ended in brawls.

On Reddit this week, Disney fans were asked what they believe Disneyland Resort should ban. They answered in droves!

The most popular answer was one we’ve reported on extensively – Live Streamers. “Tiktok live streamers. I got on pirates one time, and there was someone on live in front of me, and they just kept on talking during the whole ride. It was annoying,” u/themosttendersalami wrote.

“I feel like this happens to me EVERY time I’m on [Star Wars: Rise of the Resistance],” u/teach_them_well added.

Disney Cast Members and fans alike have long begged Disneyland Resort to ban the practice or instate stricter rules like Tokyo Disney Resort. The new policy bans commercial filming, auxiliary equipment, and “public transmission or recording of any kind that may inconvenience other Guests.” Tokyo Disney Resort already bans filming on rides at Tokyo Disneyland and Tokyo DisneySea, which is one of the strictest Disney Parks policies in the world.

While many so-called Disney Influencers bring the magic of the Disney Parks to the rest of us at home, others have found themselves with lifetime bans for breaking Disney Park rules. In June, two Disneyland Resort influencers were hit with a petition to ban them from the Disney Parks after allegedly admitting to going to the Parks while sick. They later showed negative COVID-19 tests, though another vlogging duo claims the results were faked.

Continuing on, u/DAecir wrote a response that received hundreds of votes of support: “Any type of Guest aggressive behavior.”

“Especially to cast members,” u/Tex-in-Tex agreed. “Should be automatic ban for a year or life.”

Many Disney Parks fans feel violence is increasing at The Happiest Place on Earth. In response, Disneyland Resort and Walt Disney World Resort updated the “courtesy” section of their rules to explicitly require respectful behavior between Guests. However, that hasn’t made much of a difference.

Related: Documentary to Focus on Crime at Disney Parks, Theft of Buzzy Animatronic

In July, we reported on a brutal brawl in Magic Kingdom at Walt Disney World Resort. Two families reportedly got into a physical fight after one Guest tried to rejoin their family in line for Mickey’s Philharmagic. One man involved in the fight was hospitalized with a facial laceration, while others suffered minor cuts and bruises. Reportedly, personal designer items and phones were damaged in the incident.

A surprisingly strict but popular answer came from u/austinalexan, who wrote: “Use of phones on any ride aside from transportation.”

Omg yes!! I had this 40 plus year old woman at the front of the cart on space mountain yesterday making Instagram stories throughout the ride. I thought at first she was just going to do the initial “blast off” sequence , but nope! After 3 times where it would record and then go to a bright screen i had to yell “put away your phone!” And luckily she did. I felt so bad for the French family behind us who obviously traveled from afar to have the experience of a bright phone in front of you on a dark ride like that by Karen the AP holder in her 40s riding space for the millionth time.

Others pointed out the danger of having your phone out on rides. “I’m so afraid someone is going to let their phone go and I’m going to get busted in the face,” u/westcoast7654 said.

“This would definitely reduce the number of phones that are dropped into the abyss of Space Mountain,” u/FloridaFlamingoGirl agreed.

Another Disney Parks fan, u/foreverburning, pointed out that banning cell phone use on rides could help with another ongoing problem at Disneyland Resort: frequent ride breakdowns: “Aside from the annoyance, it’s 1) super dangerous and 2) PROBABLY THE REASON THINGS CLOSE DOWN CONSTANTLY. Dropped phones etc cause a shut down.”

In another comment that received hundreds of votes of support, u/kartemiss advocated for political tee-shirts to be banned in Disney’s Dress Code. “Or anything graphic really, I see a shocking number of guys wearing T-shirts with fully naked women on them,” u/vineRefugee agreed. “Like this is a family park dude there are kids around.”

In the past year, multiple photos have surfaced of Guests wearing tee shirts with offensive/vulgar political slogans, leading some to question the double standards of the Disney dress code. In October 2022, a group of Disney Parks fans campaigned for such attire to be banned.

If Disneyland Resort were to ban political tee shirts, it wouldn’t be the first change in recent years. The Disney Dress Code went viral in 2021 after TikTok user Amanda DiMeo uploaded a video to her over 800,000 followers explaining how to get “a free Disney shirt of your choice.” The video went viral, eventually getting picked up by FOX News. Many Guests followed suit, intentionally wearing inappropriate to try and receive a free shirt.

What do you think should be banned at Disneyland Resort and Walt Disney World Resort?

The opinions reflected in this article belong to their respective owners and do not necessarily reflect the views of Inside the Magic.