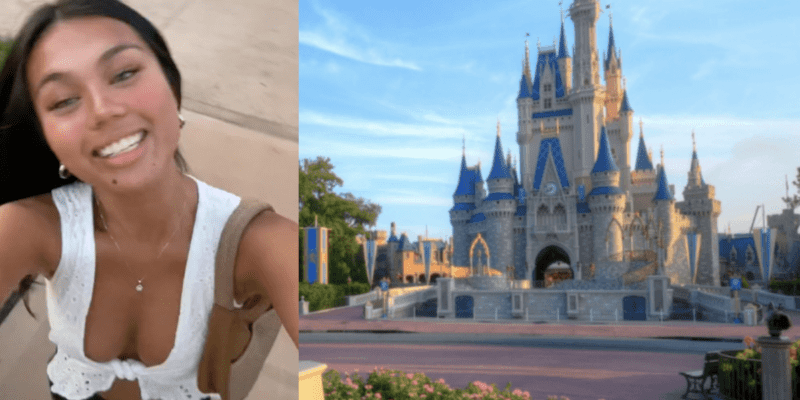 Over the past few months, TikTok has exploded with viral videos of Guests attempting to get “dress-coded” at Walt Disney World. It’s not promised but commonplace that when Disney disapproves of a Guest’s shirt, they’ll write the Guest a slip for a free shirt from a Walt Disney World souvenir shop so that they can change into something more appropriate. Remember, Walt Disney World is a family-friendly Park.

Social media has made it easier to tell the world about “magical” moments you receive on your Walt Disney World trip, like a free shirt when you accidentally break the dress code. Unfortunately, that encourages copycats to do the same and look for a freebie (and this time they do it on purpose).

In a recent TikTok video, Nicole DeLosReyes (@nicole.delosreyes) showed herself walking away from the gates at EPCOT wearing a white tie-front sleeveless top. She says, “Guys, it happened. I got dress coded at Disney, and I was told to leave or get a shirt, so now we’re getting a shirt.” In her caption, DeLosReyes wrote:

In the comments, DeLosReyes clarified that she wasn’t looking for a free shirt and that she wasn’t even offered one. She wrote, “at entry i got stopped and was told they don’t allow tie front tops…wack. so i had to either leave and change or buy merch.”

This appears to be a change from past instances where Walt Disney World would offer free shirts to those Guests barred from entering the Parks due to dress code violations so that the Guest would not have to go back to their home or hotel room to change.

We do want to note that Disney has not issued a statement on the viral TikTok trend or announced a decision to stop giving away free shirts due to the increasing dress code issues.

Though Walt Disney World’s dress code doesn’t explicitly mention tie-front tops, it does leave security a lot of wiggle room on what they will allow. The section that would apply to DeLosReyes reads:

In a follow up video, DeLosReyes explains that she didn’t realize her shirt would be a problem at EPCOT because it was more of an adult Disney Park. She mentioned having issues with a lot of drunk adults while she was there that she felt were may more disruptive.

She also noted that she wasn’t upset about the incident, just thought it was funny and was happy to go back to her hotel room and change before returning to EPCOT.

Make sure to check Disney’s dress code before packing for your vacation to avoid an interruption to your vacation. When you’re unsure, it’s better to go with the safer option so you don’t get dress coded at Disneyland or the Walt Disney World Resort!