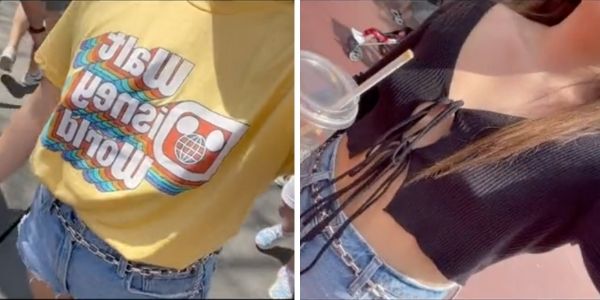 Recently, one Disney Guest went viral after sharing how she was “dress coded” in the Parks.

When taking a trip to the Disney Parks and Resorts, you may think that the only rules are to “keep your hands, arms, feet, and legs inside the ride”. But the Disney Parks can actually be quite strict when it comes to how Guests act, talk, and of course, how Guests dress.

There is no denying that Disney would like to keep the Parks as “family-friendly” as possible, meaning they do not allow any rude behavior or inappropriate attire inside. Unfortunately, sometimes issues can slip by as Guests can get “dress coded” once already inside. In the past, we have seen this issue happen with Guests wearing some truly insane outfits. Recently, one Guest went mega-viral after sharing her experience of getting “dress coded” at Walt Disney World.

In the TikTok posted by @toragrams, the Guest explains and shows what happened:

i mean, I kinda agree w them looking back at this video.

i mean, I kinda agree w them looking back at this video. #fyp #foryou #foryoupage #WomenOwnedBusiness #OscarsAtHome #SeeHerGreatness #VenmoSpringBreak

As you can see, the outfit itself wasn’t anything crazy but as a former Cast Member pointed out in the comments, any piece of clothing held together by strings or straps will not fly in the Parks. Unfortunately, the Guest who was dress-coded said that the Cast Member who pointed out her outfit wasn’t that kind about it but the one who gave her a voucher was very helpful. Eventually as shown in the video, the Guest was given a free replacement shirt.

More on the official rules for Guests below:

Clothing with objectionable material, including obscene language or graphics

Clothing which, by nature, exposes excessive portions of the skin that may be viewed as inappropriate for a family environment

Clothing with multiple layers are subject to search upon entry

Visible tattoos that could be considered inappropriate, such as those containing objectionable language or designs

Have you ever been “dress coded” at Disney? Let us know in the comments below.