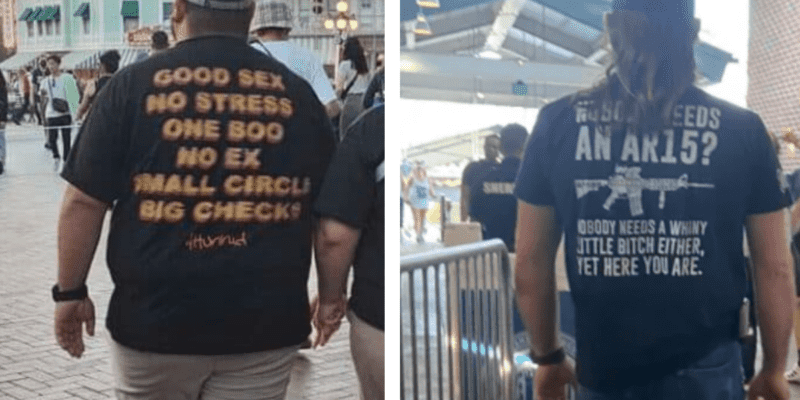 The Disney Dress Code went viral in 2021 after TikTok user Amanda DiMeo uploaded a video to her over 800,000 followers explaining how to get “a free Disney shirt of your choice.”

Related: What Changes to the “Disney Look” Mean For Cast Members

In the video, which got picked up by FOX News, DiMeo wore a cropped shirt that didn’t comply with Walt Disney World’s dress code and was given a voucher by Cast Members to get a free shirt at a Magic Kingdom merchandise location.

This started a trend of Guests intentionally wearing inappropriate clothing to the Disney Parks to receive a free shirt. While Disney doesn’t guarantee Guests a free shirt, many Guests who wore clothing that went against Disney’s code reported benefiting from a similar magical moment.

In May 2022, Disney appeared to change its policy. TikToker Nicole DeLosReyes wore a tie-front top to EPCOT and was told she’d have to buy a shirt or go to her hotel and change to enter the Parks. In July, TikToker @erinbill678 wore a halter top to Magic Kingdom and was told she’d need to buy a shirt to enter the Park. A few days ago, another Guest was asked to change after wearing a top held together by safety pins. None of these Guests intentionally wore banned clothing to get a free shirt, but all seem to confirm that Disney has told its Cast Members to stop giving away free tee shirts.
Now, the Disney dress code is causing conversation for a different reason. In the past year, multiple photos have surfaced of male Guests wearing tee shirts with offensive or vulgar writing, leading some to question the double standards of the Disney dress code.

Can you wear political shirts at Walt Disney World or Disneyland?

In one instance, shared to a “trashy” subreddit by u/Usual-Elderberry9307, a Guest wore a shirt featuring an AR-15 gun that read, “Nobody needs an AR-15? Nobody needs a whiny little b*tch either, yet here you are.”

Though some Disney Parks fans took issue with the political message, most wondered how Disney Security Cast Members didn’t stop the Guest from wearing clothing with inappropriate language to a family Resort.

One Disney fan, user u/reallymkpunk, wrote that it “shouldn’t be” allowed, saying, “Surprised this was allowed yet “scantily clad influencers” aren’t….”

In other instances, tee shirts were vulgar in different ways. One of the most popular is a pair of matching tee shirts that read, “I wanted the D” and “I gave her the D” in Disney font. There’s almost always a couple wearing these shirts at every Disney Park, and many fans feel they should be banned for suggestive content.

Last month, a photo of a man at Disneyland Park wearing a shirt that read, “Good Sex, No Stress, One Boo, No Ex, Small Circle, Big Checks” gained traction on Reddit. u/Complex-Turn-8293 posted the photo, asking why such “foul” shirts are allowed at the Disney Parks:

Many fans agreed, with some saying that Disney used to be stricter about shirts like this but may be too short-staffed or concerned about the bdoesn’tacklash to approach Guests wearing vulgar clothing. u/AMothWithHumanHands wrote:

My mom loves to tell the story on how she went to Disney for her high school graduation in the mid 80’s. She wore a shirt that said “Co-Ed Naked Barhopping” because I guess that was the “funny shirt” of the day. They stopped her two steps into the park to tell her to turn it inside out or go by another shirt.

I’m pretty sure with how busy it is lately, they have bigger fish to fry – or they don’t get paid enough to deal with a potentially unhinged guest.

u/TeeKaye28 agreed and shared a story about visiting Disneyland around 30 years ago as a teenager:

Disney used to have a dress code. I am in my late 50s. I went to Disney as a teenager with a bunch friends. One of them was wearing a flesh colored tank top with a Hawaiian shirt on top of it, open. They made her button it up before we went in.

Because it was a hot day, she kept unbuttoning it in the park. They kept making her putting it up, when she tried to refuse they threatened to throw us out.

Though many Guests haven’t been caught wearing or asked to change out of offensive shirts at Disneyland Resort and Walt Disney World Resort, Disney’s dress code does ban “inappropriate” attire. We recommend leaving shirts with vulgar language or sexual references at home.

If you’re unsure if an item you want to wear to Walt Disney World Resort or Disneyland Resort violates Disney’s Dress Code, it’s best to be cautious and choose something else. From Disney: