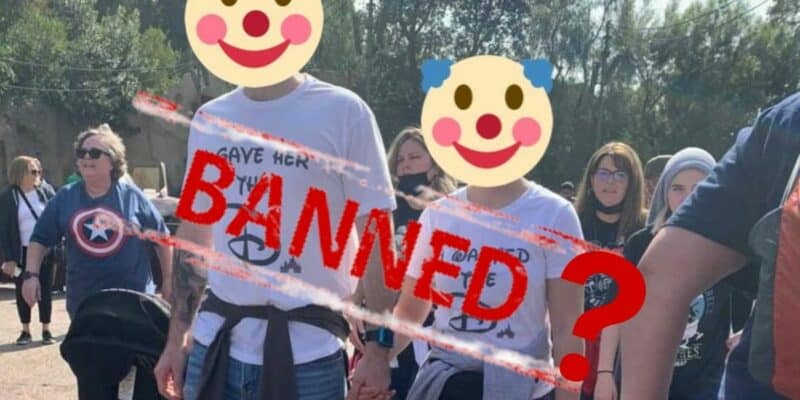 Disney fans often get creative with shirts they wear to the theme parks. We have seen couples wear shirts relating to their favorite Prince and Princesses, Mickey and Minnie, Woody and Buzz, and more.

However, one couple wore matching shirts to the Disney Parks that is causing quite the uproar amongst fans as they find the shirts extremely inappropriate.

The following Tweet is now going viral as fans are asking Disney to ban these types of shirts from the Park due to the inappropriateness. Sam Carter shared the photo along with the caption:

D is for Don’t

D is for Don’t pic.twitter.com/XnWGDAxTql

The shirts that the couple are wearing are inappropriate for a family setting, and so now others are beginning to agree with Sam Carter, and even taking it a step further as they are asking Disney to not allow shirts like this into the Park.

alea shared the photo on Twitter along with the caption:

If they banned these shirts from ever being allowed in a Disney park again I wouldn’t be mad https://t.co/WmtwZoCEsW

D is for discomfort

D is for discomfort

Teena Tweeted out that they wish Disney would ban shirts like this, writing:

And another Twitter user, who goes by RSH – Ranel G, expressed that this felt “tacky”, especially for a family theme park setting. They write:

Kind of tacky to bring to a theme park

Kind of tacky to bring to a theme park

Please keep in mind that if you are visiting a Disney Park, it is a family-friendly environment and children will be present. Additionally, Disney does have the right to refuse entry or to remove any Guest wearing inappropriate attire.

We reserve the right to deny admission to or remove any person wearing attire that we consider inappropriate or attire that could detract from the experience of other Guests.

What do you think of these shirts? Should they have been denied entry? Let us know in the comments below.