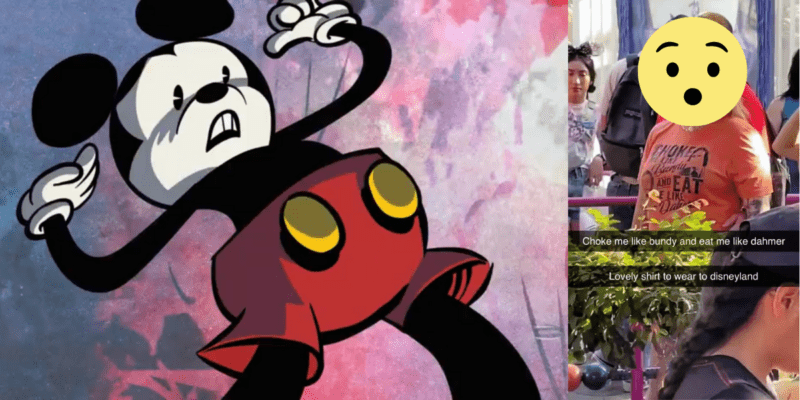 One Guest was spotted wearing a highly inappropriate shirt at Disneyland Resort, celebrating serial killers with an obscene message.

Disneyland Resort has been the staple for family fun in America for over 60 years, welcoming millions of Guests of all ages, eager to experience the magic of Disney through breathtaking storytelling, immersive lands, timeless attractions, innovative new experiences, world-class entertainment offerings, mouth-watering dining offerings, and more. With so much to see and do, it’s no wonder why Disneyland is the Happiest Place on Earth for the young and the young at heart.

While Disneyland officials constantly try to maintain a family-friendly environment throughout the Parks with several rules and regulations, Guests sometimes decide to break said rules and often end up disrupting the experience for many Guests around them. Unfortunately, this was recently the case when a Guest was spotted wearing an obscene shirt, celebrating two of the most feared and hated serial killers in modern history with a disgusting message.

The video of this incident was shared on Twitter by Sidney (@SidTheKid182), who captioned it, “Choke me like Bundy and eat me like Dahmer. Lovely shirt to wear to Disneyland.” The disgusting message was being fashioned on a bright orange shirt, with large texts and even images of the serial killers, making it hard to miss for Guests around.

Sidney added that she was aware that the video was taken at Disney California Adventure — in the queue for Inside Out Emotional Whirlwind at Pixar Pier, a kid-oriented attraction, to be precise — but said she “didn’t feel like typing ‘California Adventure’ to [her] Snapchat friends who don’t know what DCA is.”

@GratDisMemes Before i get yelled at by disney people, yes i said disneyland when we’re at DCA, didnt feel like typing califonia adventure to my snapchat friends who dont know what DCA is lol

@GratDisMemes Before i get yelled at by disney people, yes i said disneyland when we’re at DCA, didnt feel like typing califonia adventure to my snapchat friends who dont know what DCA is lol 😂 pic.twitter.com/NEMhhGSusH

Related: The Growing Problem of Vulgar, Offensive Shirts at the Disney Parks

It would appear that Guests fashioning shirts with violent and obscene messages continues to be an issue at Disneyland Resort and Walt Disney World Resort, with some Guests even showing grotesque tattoos, inappropriate for the Parks’ family-friendly environment.

We strongly advise our readers to be aware of the rules and regulations set by Disneyland Resort and Walt Disney World Resort ahead of their visit to the Disney Parks, as failing to comply with said rules could result in being kicked out of the Park, arrested, and even banned. You can click here to read Disneyland’s rules and regulations.

What do you think about this shirt’s obscene message? Let us know in the comments below!