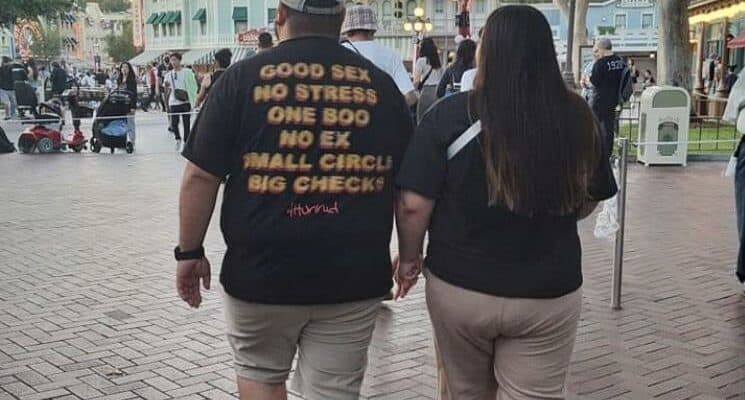 Some passionate Disney fans started discussing the dress code after an offensive and “trashy” shirt was worn in the Park.

In the past, we have seen countless situations involving Guests “breaking” the dress code ta both Walt Disney World and Disneyland. These usually take place on social media, sparking fierce debate on the Internet. When Guests are already in the Park, and Cast Members determine that their outfit crosses the line, Guests will typically be given a voucher to replace whatever piece of clothing was “breaking” the rules.

A lot of the time, these stories involve Guests wearing a shirt that is tied at the side or back, and while the overall outfit may not be revealing or inappropriate, Disney is fairly strict when it comes to tied articles of clothing. However, sometimes even Guests rally against other Guests and their outfits which is exactly what happened in a recent Reddit post.

A photo captured a Guest wearing a rather crude shirt to Disneyland, a place that is supposed to be welcoming to Guests of all ages. The full post can be seen below:

Related: Fans Frustrated At Trend Of Celebrities Kicking Guests Out At Disneyland

Users blasted the Guest for choosing that specific shirt to wear while visiting Disneyland. One user said, “I just can’t imagine getting dressed to go to Disneyland and choosing to wear this shirt.” Another said, “lol I remember I thought I was going to get kicked out with my Han Solo shirt that says “Damn right, I shot first.”

Several users called the shirt “trashy.” Another user said, “Some people have no class or decorum.” One concerned Guest claimed to see pro-gun shirts days after a mass shooting took place.

Another user issued a long statement and discussed the shirt in length, saying:

I am a part of the Disney Company just not within the parks. They would never allow us to wear shirts like this (or shirts with large guns/semi-automatic weapons often seen at Disneyland as well ect ect) on our work Campus and we have a super lax dress code. I think at the parks there are literally too many people to enforce. Like if you are a non employee going to the animation campus you most likely had someone vouch for you and you want to be on your best behavior, the parks are more of a product.

For those  wondering, here is how Disneyland describes its “dress code“:

Have you ever been “dress coded” while visiting the Disney Parks?