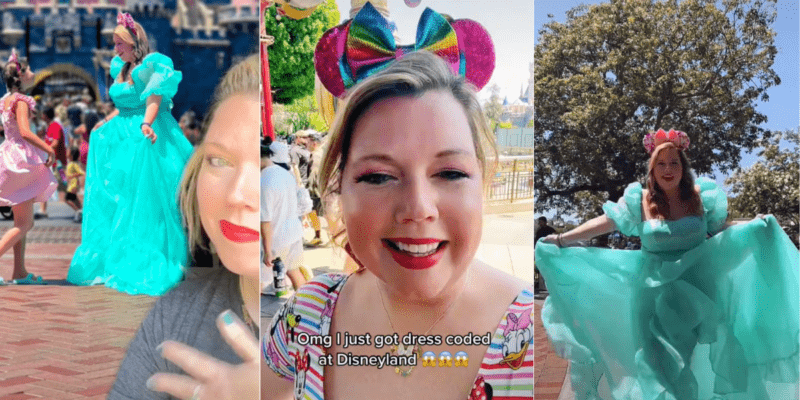 A TikTok trend that encourages Walt Disney World Resort and Disneyland Resort Guests to wear inappropriate tops to receive a free tee shirt got so popular this spring that Cast Members were instructed to stop giving out free clothing.

One Disney Parks influencer, Ashley Aiello (@gardenofarden), was dress-coded at Disneyland Park this week, but not for wearing an inappropriate shirt:

I cannot believe this happened. Has anyone else had this happen??😭😭😭 #dresscoded #disneyland

After entering the Park, Aiello changed into a ball gown to take product photos for her small business. Aiello makes Mickey Mouse ears and other Disney Parks inspired accessories.

In a follow-up video, Aiello shared some photos of the dress she wore at Disneyland Park:

In the video, Aiello explains that she visits Disneyland Resort and Walt Disney World Resort between one and three times a year and takes product photos for her small shop while on vacation:

“So, me being the extra person that I am, I got a ball gown to take in front of the Disneyland Castle for product photos with my daughter. This is what I was wearing. Nothing crazy… It was just a ball gown. I’ve seen lots of influencers take pictures with ball gowns; I’ve done it before at Disney World. I really didn’t think that there was anything wrong with it.”

In a second video, Aiello shares that she was dress coded after changing into the ball gown and posting in front of Sleeping Beauty Castle at Disneyland Park:

She maintains that the dress was “nothing wild” and she’s seen other influencers take photos at Disneyland and Walt Disney World in similar clothing before.

“I put it on for pictures right in front of the Castle to take product photos, and I was approached by a Cast Member and security and asked if I had anything else to change into. I said, ‘Yes, of course.’ And he said, ‘Well, you’re going to need to do that right now. This dress is a security issue,'” Aiello explains.

Related: Guest Screams Profanity at Disney After Getting Dress-Coded

Aiello was confused but says she quickly changed and didn’t fight with the Disney Park Security Cast Member. She felt she may have been targeted:

“And I’m thinking, like, okay, security issue for who? But I didn’t fight it at all. I ended up taking some pictures already. It was totally fine. But I have done this before at Disney World. So is this a thing? Was I targeted?”

It’s important to note that in the photos Aiello shares of herself at Walt Disney World, her dress isn’t dragging on the ground like it was at Disneyland Park, which is likely why she was asked to change. This is explicitly mentioned in the Disneyland Resort dress code:

More on the Disney Dress Code

Disneyland Resort has strict apparel guidelines that must be followed when visiting Disneyland Park, Downtown Disney, and Disney California Adventure. From Disney:

For your safety and the safety of other Guests and Cast Members, it’s essential to wear proper attire and follow the Disneyland Resort dress code.