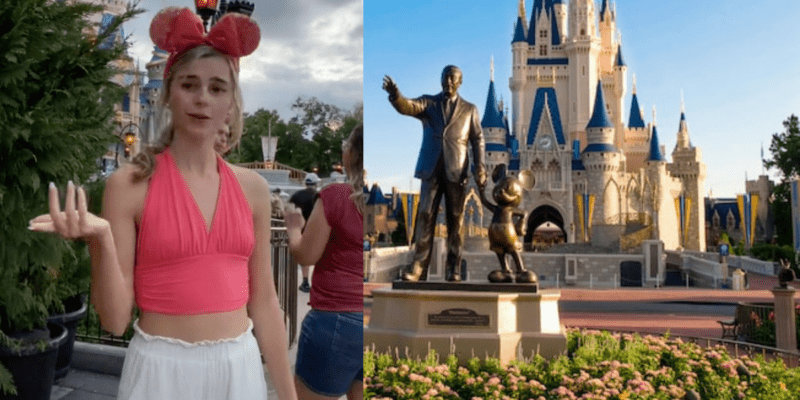 Last year, a controversial TikTok trend went viral regarding the dress code at Walt Disney World. It all started with a video by TikTok user Amanda DiMeo, who uploaded a video to her over 800,000 followers explaining how to get “a free Disney shirt of your choice.”

In the video, which got picked up by FOX News, DiMeo wore a cropped shirt that didn’t comply with Walt Disney World’s dress code and was given a voucher by Cast Members to get a free shirt at a Disney Park merchandise location.

Recently, however, Disney seems to have changed its policy. In a viral video from earlier this month, TikTok user Nicole DeLosReyes showed herself walking away from EPCOT after being turned away for wearing a tie-front shirt. She was told to either purchase her own replacement or change, leading fans to speculate Walt Disney World has cracked down on giving away free shirts to combat the trend.

Last week, another Guest had the same experience. TikTok user @erinbill678 showed herself dancing at Walt Disney World wearing a pink halter-style top that tied in the back, with text overtop the video reading “Pov: Disney dress coded you.”

Erin mentioned that she did not receive a free shirt as the previously trending TikTok users did. Her caption read:

And no I did not get a free shirt!

In a follow-up video, Erin clarified that she wasn’t trying to get dress-coded and has worn this specific top to the Parks multiple times. She shared a quick clip of herself walking up to scan her MagicBand at Magic Kingdom Park Entry when a Cast Member said, “Do you have a different shirt you can wear?”

The Cast Member reportedly told Erin that any top that can become untied isn’t allowed. Erin expressed confusion since ties are not explicitly mentioned in the Walt Disney World dress code, which reads:

Walt Disney World keeps their definition of “inappropriate” vague, so it’s up to the discretion of the Cast Members at Park entry to decide if clothing confirms to the dress code requirements.