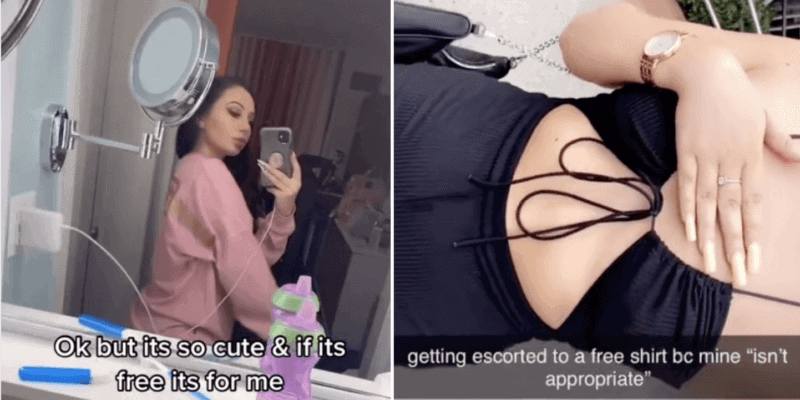 Two women on the social media platform TikTok have recently showcased what happens at Disney Parks when Guests wear attire that is deemed “inappropriate” by Cast Members.

First, Amanda DiMeo shared how to get a “free Disney shirt of your choice” at Walt Disney World Resort with her over 800,000 followers. The TikTok star told her fans that she wore a cropped shirt that did not comply with the Park’s dress code and, as a result, was allowed to select any shirt she wanted — in this case, a popular spirit jersey style — to change into.

In her video, which has nearly six million likes, DiMeo said:

DiMeo showed off her new pink Disney World spirit jersey with the caption, “Ok but its [sic: it’s] so cute if its [sic: it’s] free its [sic: it’s] for me”. Although DiMeo promoted this to her followers as a way to get a free souvenir from Magic Kingdom, it is important to note that intentionally wearing attire that goes against Disney’s dress code is not encouraged.

Like DiMeo, Schueller, too, was given a free Disney World shirt to change into. However, in this case, the Guest was also confused about the enforcement of Disney’s dress code regulations:

In the comment section of her video, Schueller said she had previously worn the shirt to Animal Kingdom and was not reprimanded.

“Fyi I was at Animal Kingdom ALL morning without issue,” Schueller wrote. “Went to Epcot and this happened. Went back to AK and had no issue once again.”

“If Disney wants to endorse a dress code, then they need to do just that,” she continued. “But the inconsistency… pls.”

In the screenshot from Schueller’s video [above], she used the caption, “it’s true guys…getting escorted to a free shirt bc mine “isn’t appropriate”, indicating she had seen DiMeo’s viral video already. At this time, Schueller’s own TikTok has also gone wild, with nearly four million views.

Perhaps the biggest issue here, as indicated by Schueller, is the reported inconsistency of dress code enforcement at various Disney World theme parks — Magic Kingdom, EPCOT, Disney’s Animal Kingdom, and Disney’s Hollywood Studios. Disney has not officially commented on either of these Guests’ apparent dress code violations at this time.

What are your thoughts on the seemingly inconsistent enforcement of Disney’s theme park dress code?