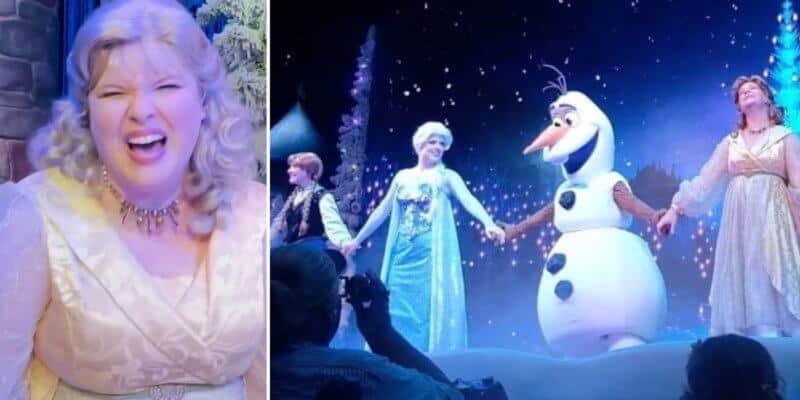 Are you a huge fan of Frozen? Do you enjoy staying cool and watching Frozen Sing-Along Show in Disney’s Hollywood Studios? If you’ve never experienced Disney’s stage show, For the First Time in Forever: A Frozen Sing-Along Celebration then you are in for a Frozen treat!

One of the best parts of this Disney live entertainment show is the amazing and hilarious Royal Historians. As Guests help sing along some Frozen classics such as “Let It Go” with Elsa and Anna, two Arendelle experts come in and out of the show and share some banter while retelling the story of this classic Disney film.

Now Aria from Arendelle has decided to leave the stage to become a Tiktok star! Check out this amazing interview as Disney asks Aria to share some backstage secrets of a Frozen Sing-Along Celebration.

Are reindeer better than people?

Enjoy this interview with Aria, the Royal Historian of Arendelle, as she shares where she gets her gorgeous attire from and her current love life status as Disney parks on TikTok states,

For the first time in forever

Currently, Disney fans are enjoying this Frozen concert in Disney’s Hollywood Studios with showtimes every hour ranging from 10:30 a.m. to 7:30 p.m.

Want to know more about this spectacular snowy show? Without giving too much away, Disney’s website shares,

Who is your favorite Frozen character in this show? Let us know in the comments below!