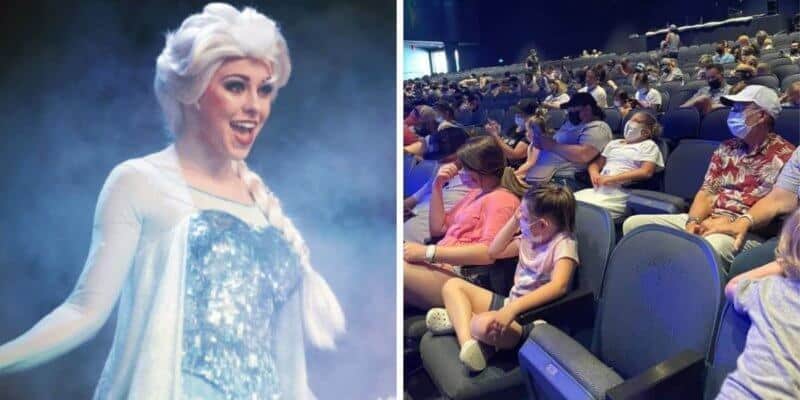 Disney World recently announced they will begin reducing social distancing in a phased approach. We have already seen Cast Members begin removing social distancing markers as well as taking down the plexiglass in the Star Wars: Rise of the Resistance queue line. We’ve also seen certain attractions begin loading all rows, including on Tower of Terror at Disney’s Hollywood Studios.

Now, we are also seeing Disney reducing social distancing measures within show theaters, including For the First Time in Forever: A Frozen Sing-Along Celebration, also at Disney’s Hollywood Studios.

In October 2020, Disney brought back the fan-favorite show after it was temporarily suspended due to the ongoing pandemic. Once the theater reopened to Guests at Disney’s Hollywood Studios, Cast Members made sure to fill in every other row, as well as keep several seats open between each party to ensure a safe social distance between Guests.

Now, as Walt Disney World reduces the social distancing protocols in a phased approach, the Cast Members are beginning to fill every row (when needed) as well as only keeping one seat open between parties.

Our Inside the Magic team recently visited Disney’s Hollywood Studios and stopped by the theater to watch For the First Time in Forever: A Frozen Sing-Along Celebration. When entering the theater, every other row was initially filled, but as more and more Guests came into the theater, the Cast Members began filling in those open rows to accommodate the overflow.

Additionally, instead of having several seats open between parties, Guests were only told to leave one seat open in between each party. You can see this reflected in the photos below.

Disney is continuing to reduce social distancing throughout the theme parks as part of their phased approach. Additionally, Guests no longer have to wear a face mask while outdoors and walking around the parks — It is important to note Guests must still wear face coverings while on attractions and while indoors. Cast Members have been walking around enforcing this new rule.

Inside the Magic will continue to update you as we see safety protocols be updated at Walt Disney World.

Related: When Will Social Distancing End at Disney Parks?

More on For the First Time in Forever: A Frozen Sing-Along Celebration

For the First Time in Forever: A Frozen Sing-Along Celebration is described as:

Are you excited to see social distancing being reduced within certain parts of the theme parks? Let us know in the comments below.