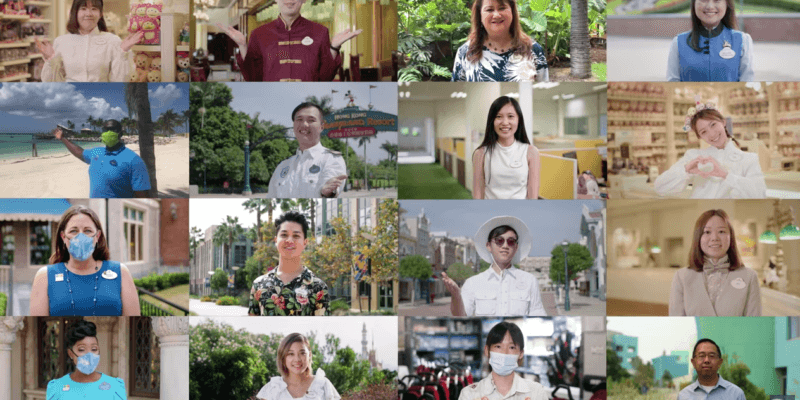 Disney Parks, Experiences and Products Chairman Josh D’Amaro has shared a new letter to Disney fans to emphasize inclusion at the Disney Parks. One of the ways that the theme parks are becoming more inclusive is by allowing Cast Members (Disney Parks employees) at the Disney theme parks — including Walt Disney World Resort and Disneyland Resort — to express themselves with a less rigid dress code.

The letter — published to Disney Parks Blog and titled “A Place Where Everyone is Welcome” in honor of Walt Disney’s dedication of Disneyland — explains the company’s goal of making the Disney Parks more inclusive places. In the statement released today, D’Amaro confirms that moving forward, Disney Parks will take a gender-inclusive approach to the dress code (known as the “Disney Look”).

This means that Cast Members will be allowed more flexibility in how they present themselves at work, with “gender-inclusive hairstyles, jewelry, nail styles, and costume choices” as well as “appropriate visible tattoos.”

Read a portion of D’Amaro’s statement below:

Our goal is also to have more representation and accountability across our organization, starting with my own leadership team and extending throughout our business worldwide, through tools and mentorship and learning programs that create awareness and foster leadership accountability.

We’re looking at other traditions, too – including the policies that guide how our cast members show up for work. Our new approach provides greater flexibility with respect to forms of personal expression surrounding gender-inclusive hairstyles, jewelry, nail styles, and costume choices; and allowing appropriate visible tattoos. We’re updating them to not only remain relevant in today’s workplace, but also enable our cast members to better express their cultures and individuality at work.

Moving forward, we believe our cast, who are at the center of the magic that lives in all our experiences, can provide the best of Disney’s legendary guest service when they have more options for personal expression – creating richer, more personal and more engaging experiences with our guests.

This is just the beginning as we continue to work toward a world where we all belong – including a more diverse and inclusive Disney Parks, Experiences and Products. There’s more to do, but we’re committed to listening, learning and making meaningful improvements.

The world is changing, and we will change with it, and continue to be a source of joy and inspiration for all the world. We’ll never stop working to make sure that Disney is a welcoming place for all. I’m excited about where we’re headed, and we’ll have more to share soon. Thank you for joining us on this journey.

D’Amaro’s statement shared on Tuesday is a follow-up to the announcement of Disney adding a fifth key — the “Inclusion” key — to their Cast Member training in order to “cultivate a culture of belonging” among the Cast and Guests. You can read all about that here.

“Inclusion is essential to our culture and leads us forward as we continue to realize our rich legacy of engaging storytelling, exceptional service, and Disney magic,” D’Amaro wrote.

Other examples of Disney’s move toward inclusion at the theme parks have come through the announcements of changes coming to Disney attractions, like the retheming of Splash Mountain to The Princess and the Frog as well as the removal of several characters and scenes in the Jungle Cruise. These changes are taking place both at Disneyland Park in California and at Magic Kingdom Park in Florida. More information can be found here.

Watch the video that accompanied the announcement:

All who come to this happy place are welcome ?✨ #Disney #DisneyParks #Inclusion #Keys #Tradition #CastMember

Additionally, the Disney Parks ambassadors — those who represent Disney theme parks across the globe — also participated in the following video to share more information:

We are excited to share the Key of Inclusion as we strive towards creating a place where everyone belongs.

What do you think of Josh D’Amaro’s explanation of Disney’s goal to make the theme parks more inclusive? Do you think more changes should be made? Let us know in the comments.