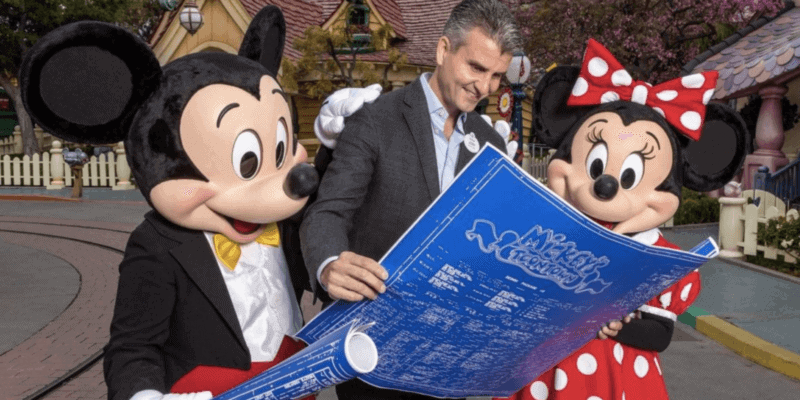 2020 was not a good year for anyone to say the least. The ongoing pandemic hit hard and in March of last year, the U.S. Disney Parks were forced to shut their gates for a temporary closure.

When the theme parks shut down, many Cast Members were sent home due to pandemic closures and waited desperately to hear if they would return to work. Nearly six months later, The Walt Disney Company made the heartbreaking decision to lay off over 30,000 Disney Parks Cast Members due to the financial impact the parks had.

Since then, Disney Parks, Experiences, and Products Chairman Josh D’Amaro has comforted Cast Members and even plead for California state officials to reopen Disneyland Resort, in hopes that nearly 80,000 jobs associated with Disneyland and the surrounding area.

It’s no secret that Josh D’Amaro has a soft spot for his Cast Members. During the reopening of Walt Disney World in Florida and Downtown Disney in California, he was seen comforting, apologizing, and speaking to each one as he passed by. Many Cast Members posted on social media kind words and were in shock that a man of his stature was making rounds to check on them.

With the reopening of the Disneyland Resort theme parks coming at the end of April, and the grand news yesterday of Avengers Campus finally getting an opening date, many Guests are wondering if Disneyland will be able to bring back even more Cast Members.

In a recent interview with CNN, Disney Parks, Experiences, and Products Chairman Josh D’Amaro spoke about the recent Disney Parks layoffs, the future of the Cast Members, and how much he truly cares about them. He shared:

It is heartwarming to hear and see that in the worst of times, there are many people you can turn to, and to have a boss who cares so much about their employees is refreshing and inspiring. We look forward to seeing what the future holds for Disney, and its Cast Members. We here at Inside the Magic wish them nothing but best for 2021 and beyond.

Do you need advice on planning your next Disney adventure? Our friends at Academy Travel can help!