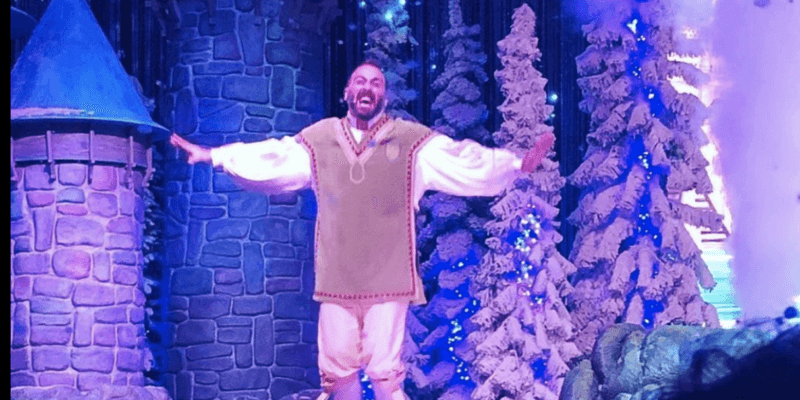 There are some Cast Members that truly touch Guests’ hearts, and at times, can become a big memory and part of your Disney vacation. Often, Disney performers tend to have a lasting impression on Guests as they create a unique and stylized experience in their own immersive world.

Former Cast Member of 15 years Benjamin Ptashinsky (@EquityBen on Instagram) is one of those people. After becoming quite well known for hosting For the First Time in Forever: A Frozen Sing-Along Celebration at Disney’s Hollywood Studios, it was sad to think that he, among many others, was furloughed at the start of the pandemic. Later, after Disney World reopened the theme parks, the show asked to have him back, but Ben declined to pursue early retirement, spend time with his family, and create more online content.

One of the ways he has been doing this is by reading children’s stories online each night in a segment called Ben Time Stories, which has since concluded. According to Click Orlando, Ben noted:

“You read all of these books, they’re so much fun. They’re so silly and they’re not real. So they teach kids great and valuable lessons, but the one lesson I found missing in these children’s books is life isn’t always perfect. You can have a bad day and that is A-OK.”

Because of this, Ben even wrote his own book titled GoodyBen Makes Lemonade. When talking about his new book, Ben told Click Orlando:

“It is illustrated by a furloughed performer named Candace Neal. She is just stunning and wonderful. The book teaches children you can have a bad day and that is OK.”

The book features Ben’s own daughter, which makes it even more special. Ben told Click Orlando:

“She is in the book and is so ecstatic when I get to read this book to her every single night. Her copy is torn to shreds because we have read it so many times. Her copy was our first copy. This book is a really great way for her to realize sometimes things just don’t go your way. ‘I’m sorry kid, you didn’t eat your dinner, we can’t go to the park after dinner,’ and that’s just life. And she’s learning through living life that it’s OK.”

There are a few things that people can do when they have unexpected free time on their hands, but to hear that Ben was able to fully write a book for his daughter just goes to show that Ben’s creativity as a performer easily extended into other mediums. Plus, during this pandemic, to send a message that says “it’s okay not to be okay” is something that many people have needed to hear, whether you are a child or an adult.

On Amazon, the book’s description reads:

Children’s books are sunshine and lollipops. @equityben teaches kids that it is normal to have a bad day. Watch GoodyBen dive into several pieces of children’s literature as he becomes wacky characters to cheer up his day.

The book also is rated exclusively with five stars on Amazon, with rave reviews that sound a lot like one left by Alyssa W.:

Such a great reminder that it’s ok to have a bad day. @equityben has written a fantastic book for all ages. Beautifully illustrated. Both my kids love this book.

You can purchase Ben’s new book on Amazon here.

If you want to see the comedian again, be sure to check him out on Instagram. Fans can also watch him every Monday and Thursday for cooking lessons! The recipes are easy to follow along for anyone 13 years of age or older or anyone who just wants a laugh.

What have Cast Members done without Disney?

It seems that during these times, where many Cast Members had to leave Disney — whether that be on their own accord or Disney’s — the magic never stopped. If we take a look at a story we previously reported, two former Cast Members, Erin Blackketter and Laura Bartlett, made sure that the children of out-of-work CMs still received a Christmas gift through their Cast Member Toy Box drive.

We also saw the start of Cast Member Pantry, which was a food bank run and created by furloughed Cast Members to ensure that everyone was able to keep food on their tables.

Additionally, we saw an influx of performers such as Ben taking their skills and magic to the internet so that everyone could still have a piece of Disney at home. Piano Rob (@piano_rob), who previously played at Jellyrolls piano bar at Disney’s Boardwalk Resort has always been a fan-favorite with his Dueling Pianos show, took to Instagram to play “Quarantunes” on a daily live show where Guests who used to come and watch him perform could request songs and hear them from their own home.

Rob is now performing at The Boathouse restaurant in Disney Springs and Tin Roof at ICON park in Orlando, but he continues to share the magic of song on his daily Instagram live shows.

Content creator and former Cast Member Jojo (@jojocrichton) is another magic-maker we have featured on our site because of the joy he has been able to bring through social media now that he is not currently working for Disney. Most recently, Jojo sent his droid around Disney Springs to hand out roses to Guests! Read more about that here.

What Cast Member interaction are you currently missing at the parks? Did a Disney Cast Member create magic for you on your vacation?

If you want to experience what it is like to have a magic moment with a Cast Member, as well as be catered to with the highest service, why not check it out first hand? Planning a Disney vacation is the best way to hop into Disney magic. Plus you can see Mickey Mouse and Minnie Mouse and run around Magic Kingdom, EPCOT, Animal Kingdom, Disney’s Hollywood Studios, and Disney Springs! Click here to begin today.

Comments Off on Why One Beloved Cast Member Left Disney World