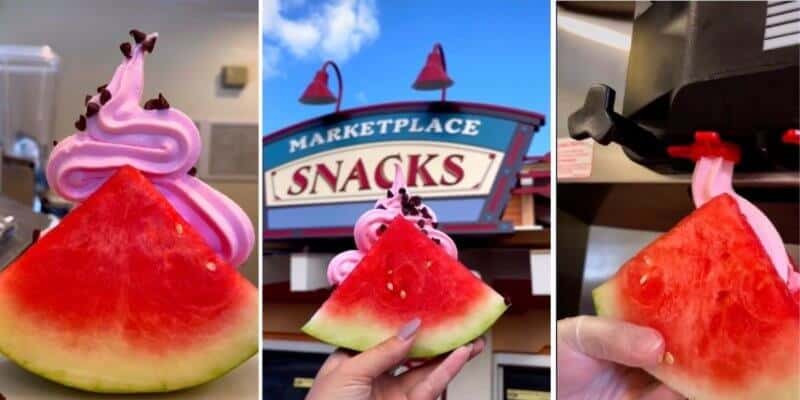 Getting a Dole Whip at Disney World is a ritual for many Guests and a coveted experience as you cannot just walk up to an ice cream stand and snag a Dole Whip the way Mickey Premium Bars are available.

When Guests want a Dole Whip, they must be strategic in terms of which theme park they visit and which Disney Resort. However, there are a few locations at Disney Springs that will not only give you the classic pineapple Dole Whip but secret Dole Whip options from their TikTok menu!

Disney Parks TikTok (@DisneyParks) just released a TikTok showcasing the Dole Whip Watermelon treats that Guests can snag at Marketplace Snacks, and it comes inside an actual slice of watermelon!

The mouth-watering and refreshing dessert is perfect for summer and will only be available for a limited time. So, if this is something you would like to get your hands on, be sure to head to Disney Springs as soon as you can. All you have to do is ask for the secret TikTok menu watermelon Dole Whip, and you will get a snack that you will like perfect on any Instagram feed.

If you don’t like the idea of a watermelon slice acting as a cup, don’t fret! Marketplace Snacks has a regular watermelon Dole Whip on its menu that also looks delicious. Disney Springs shared the snack with all of its Twitter followers:

Summer is right around the corner and we’re thrilled to share that Watermelon DOLE Whip is coming back soon to @DisneySprings Be on the lookout for this delicious DOLE Whip Watermelon Parfait with Key Lime Custard coming to Marketplace Snacks on May 26.

Summer is right around the corner and we're thrilled to share that Watermelon DOLE Whip is coming back soon to @DisneySprings! ? ? ? Be on the lookout for this delicious DOLE Whip Watermelon Parfait with Key Lime Custard coming to Marketplace Snacks on May 26. ? pic.twitter.com/zsVE23rBov

So, it seems that Disney Guests have a lot of Disney snacks to indulge in this summer!

Hungry for some serious soft-serve fun? Head to this Marketplace kiosk for frosty Dole Whip desserts and pineapple rum floats—2 hard-to-beat tropical treats! Savor a variety of flavors as well as seasonal offerings and limited-time specials you won’t want to miss.

Which of the watermelon Dole Whips do you want to purchase when you are at Disney Springs next?