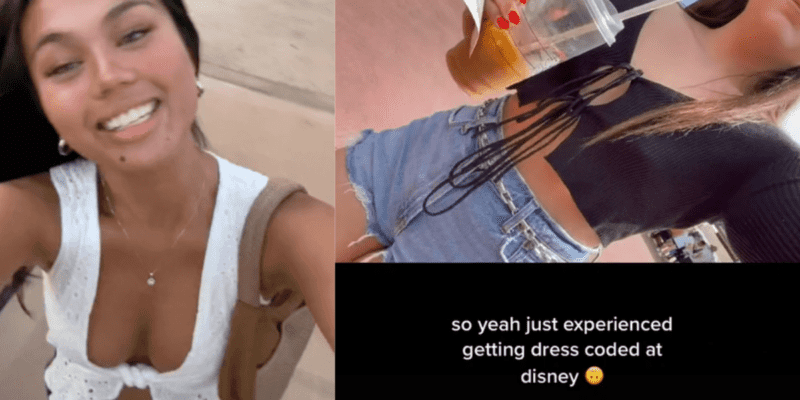 Last year, a controversial TikTok trend went viral regarding the dress code at Walt Disney World. It all started with a video by TikTok user Amanda DiMeo, who uploaded a video to her over 800,000 followers explaining how to get “a free Disney shirt of your choice.”

In the video, which got picked up by FOX News, DiMeo wore a cropped shirt that didn’t comply with Walt Disney World’s dress code and was given a voucher by Cast Members to get a free shirt at a Disney merchandise location.

In her video, DiMeo says:

While Disney doesn’t guarantee Guests a free shirt, many Guests who wore clothing that went against Disney’s code reported benefiting from a similar magical moment.

A smaller TikTok account, @alyssaschueller, posted a video in a bikini-style top at EPCOT, where she was reportedly asked to change and escorted by a Cast Member to a gift shop to find a new tee shirt.

In another incident late last year, TikTok user @jordyngraime wore an open back top to Walt Disney World. She showed a receipt for a shirt that the Disney Park allegedly gave her for free.

The former Cast Member seemed to be correct. Though Walt Disney World’s dress code doesn’t directly mention ties on clothing, another Guest was dress-coded this year for wearing a tie-front crop top.

In a recent TikTok video, Nicole DeLosReyes (@nicole.delosreyes) showed herself walking away from the EPCOT entrance wearing a white tie-front sleeveless top. She says, “Guys, it happened. I got dress coded at Disney, and I was told to leave or get a shirt, so now we’re getting a shirt.”

In the comments, DeLosReyes clarifies that she wasn’t looking for a freebie and wasn’t even offered one. She wrote, “at entry i got stopped and was told they don’t allow tie front tops…wack. so i had to either leave and change or buy merch.” DeLosReyes later confirmed that she went back to her hotel, changed, and had a great time at EPCOT.

This appears to be a change from past instances where Walt Disney World would offer free shirts to those Guests barred from entering the Parks due to dress code violations so that the Guest would not have to go back to their home or hotel room to change.

Walt Disney World Resort has not issued a statement on the viral TikTok trend or announced a decision to stop giving away free shirts due to the increasing dress code issues.

Walt Disney World’s dress code leaves room for interpretation. If you’re unsure if a certain item of clothing is inappropriate, it’s better to be safe and go with another options. Disney’s guidelines are:

Related: What Changes to the “Disney Look” Mean For Cast Members

Can you wear a princess dress to Walt Disney World?

Unfortunately for safety reasons, Guests can only dress like their favorite princess at Walt Disney World if they’re under the age of 14.

However, that doesn’t mean you have to dress blandly! There are options for adults who wish to dress up at Walt Disney World.

One option for everyday Guests at Walt Disney World is to Disney Bound. Disney Bounding is wearing everyday clothes inspired by Disney characters’ iconic outfits using color and accessories. This practice is encouraged by Disney!

Mickey’s Not So Scary Halloween Party

At Mickey’s Not So Scary Halloween Party, Walt Disney World bends the rules and allows Guests of all ages to wear costumes at Magic Kingdom! However, they do have a specific dress code for the party. From Disney:

While we encourage creativity, we also value safety and good judgment. If you’re planning to attend these special events, take a moment to read over our latest rules and regulations:

For Guests 14 Years of Age or Older:

Have you ever been dress-coded at Disney World? What do you think of the rules? Let us know in the comments below.