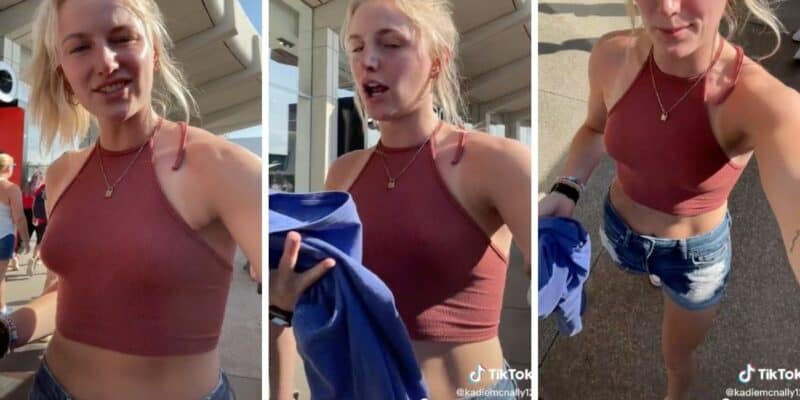 The controversial TikTok trend of being “dress-coded” by Disney security all began when TikTok user Amanda DiMeo uploaded a video explaining how to get “a free Disney shirt of your choice.”

If you were not aware, DiMeo wore a cropped shirt to Disney World, which did not comply with the Park’s dress code. She was pulled aside by a Cast Member and was given a voucher to get a free shirt at a Disney Park merchandise location so that she could change and wear a more appropriate outfit around the Park.

Ever since, other Guests have gone to Disney World to get dress-coded and, essentially, get a free t-shirt. Many videos have even gone viral.

However, as the TikTok trend spread throughout social media, Disney decided to change its dress-code policy and instead of giving out free t-shirts, they are now turning away Guests, telling them that prior to entering the theme park, they must first go back to their original destination and change or they can walk to the shop and purchase a new shirt with their own money.

Recently, a Guest visited EPCOT, wearing a crop top, who was pulled aside by a Cast Member and informed their attire was not theme park appropriate.

In the video, the Guest can be heard yelling profanity as they were extremely annoyed they had to wear a “ugly” shirt around the Park. They captioned the video:

Remember, Guests must comply with the Walt Disney World dress-code, which reads:

Costumes and costume masks, which may not be worn by Guests 14 years of age or older.

What do you think of Disney’s dress code rules? Let us know in the comments below.