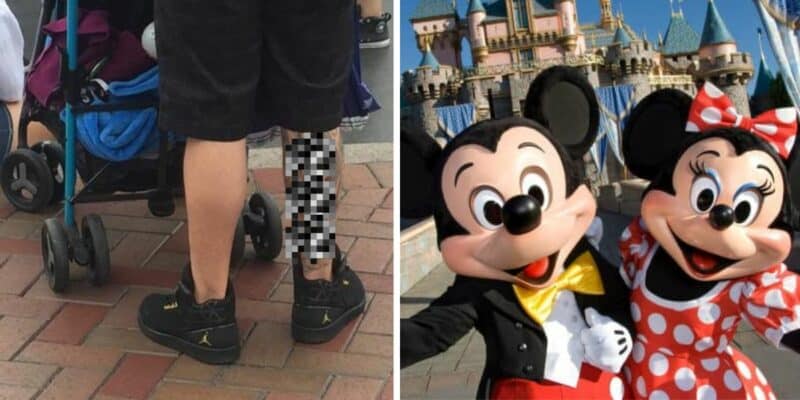 In the past, we have seen countless situations involving Guests “breaking” the dress code at both Walt Disney World and Disneyland.

These incidents usually take place on social media, sparking fierce debate on the Internet. When Guests are already in the Park, and Cast Members determine that their outfit crosses the line, Guests will typically be given a voucher to replace whatever piece of clothing was “breaking” the rules.

A lot of the time, these stories involve Guests wearing a shirt that is tied at the side or back, and while the overall outfit may not be revealing or inappropriate, Disney is fairly strict when it comes to tied articles of clothing.

However, sometimes issues can be about more than just a Guest’s clothing, and recently, a more permanent feature lit social media ablaze.

Tattoos can be a very personal and private thing, but for some, part of the fun is showing it off to everyone. Of course, tattoos can act as a portable art installation if done right.

But sometimes, you see a tattoo and have to wonder “why?” which is exactly what happened recently with a Guest at Disneyland.

The tattoo can be seen here, but we will warn you that it is extremely explicit so we will not show it here in our article.

The tattoo depicts a naked woman and another bent over. The tattoo is placed on a Guest’s right leg. The post sharing the tattoo went viral on Reddit, and hundreds of users shared their opinion on the tattoo in the comment section.

“That is trashy and awful and I’m not defending him, he may have forgotten it’s there. I have a tat on the back of my neck and I forget it’s there a lot.

But God that should be covered up”

Another user said that the tattoo was “gross.” Several poked fun at it and theorized that it might have seemed like a better idea under certain influences:

“How much Bud Light does one have to drink to decide that’s a great idea for a tattoo?”

Of course, Disneyland is far less strict about tattoos that Guests may have than they are about the clothing they wear. The Disney Parks have all made great strides toward being more inclusive, now letting Cast Members show off whatever tattoos they may also have.

We are not sure if this Guest was ever approached by a Cast Member and informed they needed to cover up. Disneyland is a theme park for everyone, meaning children would see the artwork.

For those  wondering, here is how Disneyland describes its “dress code“:

What do you think of the tattoo?