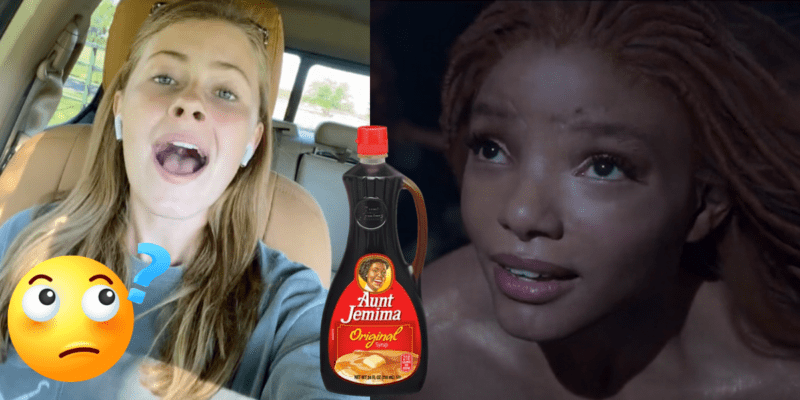 The Little Mermaid doesn’t hit theaters until May 26, 2023, but it’s already been the subject of intense debate on social media. Over two million people mass-disliked the trailer in what was seen as racist backlash for Halle Bailey’s role as Ariel. At the same time, viral videos show delight from young Black girls who appreciate seeing themselves represented on the big screen.

Now, a self-described TikTok “truth” teller is being called out for her comments on The Little Mermaid (2023). @realthesavvytruth said:

“The same people that are proud that Disney made Ariel a Black woman with dreads are the exact same people who threw a temper tantrum until every single person of color was removed off of popular home name brands. The hypocrisy of this is officially mind-dumbing.”

The user quickly turned off comments on the video after receiving a massive negative response. Many users stitched the video instead to share their thoughts, like @ghost.inthemaking3.0:

“You’re telling me that they don’t have a problem with classic Disney movies being more diverse, but they do have a problem with offensive stereotypes? Ridiculous,” the TikToker said sarcastically. She also asked, “Why are we yelling? This is terrifying. Why are you so mad?”

“I think it’s hilarious that the people who are always screaming about how cancel culture is ruining everything are always the first to jump on the cancel train,” she continued. “Two million dislikes on YouTube! You guys can’t even wait until the movie is released.”

Another creator called the TikToker a “mayonnaise warrior” and said she blatantly displayed her racism. From @luisitorio787:

“They don’t even give a sh*t anymore about how they show their racism. They’re not even, like, sneaky about it,” he said. “And the way you say, ‘Black.’ Lady, oh my f**king God. What could possess you to think this was a good idea to put this sh*t on TikTok?”

“You’re still mad about a fictitious half-fish woman or whatever the f**k? This is not about the godd*mn fish,” he argued. “This is about you not liking Black people. Just f**king say that. Then you can go onto your Klan rallies and not worry about it anymore.”

Despite turning off comments on her original video, @realthesavvy responded to a stitch she received from @jolly_good_ginger, who said, “I need you to understand how deeply seeded that racism is. That statement comes from her ancestors:”

@Jolly you’re entitled to your opinion but you will not say someone has racism rooted in their soul from their ancestors. #littlemermaid #racism

The TikToker said she holds no hatred towards people who have responded to her or people of color but that it’s incorrect to say she has “deeply-seeded” racism in her ancestry. She went on to paraphrase a quote from Martin Luther King, Jr.:

“As a Christian who tries to better herself with her walk in Christ every single day, I hold zero hatred in my heart for no man. I want to be judged by the content of my character, not the color of my skin or the sexual genitals I was born with. And that’s how I intend on judging everybody else.”

As far as The Little Mermaid goes, the TikToker claimed that she would’ve been okay with Bailey’s casting if Ariel’s hair was more accurate to the animated film. “The nostalgia of the movie just isn’t there,” she argued.

She went on to say that her favorite Disney Princess is Tiana from Princess and the Frog (2009), but she finds it “interesting” that most people wouldn’t be okay with casting a “white chick with blue hair” as Princess Tiana in a live-action film.

“Why do they have to reuse all these white characters, recover them with Black people, and then call it a new story? Why can’t we make new, intricate, well-loved, designed characters and then have them be played by Black actors and actresses instead of just reusing white ones?” she asked.

The TikToker only apologized for calling Ariel’s hair “dreads:”

“I find it interesting that the only thing that anyone can come after me about that video was the fact that I didn’t correctly define what type of hair that Ariel had. Okay, I do apologize. I’m sorry that I didn’t micro-analyze it to make sure that it wasn’t a Marley braid or a lock or a twist or a box braid or a cornrow… I’m not an expert in Black hairstyles, so I’m not going to come on here and say that I know everything about it when I don’t.”

“I find it interesting that Black people get put up on a pedestal and removed when it’s convenient for a political narrative. Why do these amazing characters from classic food companies that we love get removed when it’s called racist, but then when they need more representation, instead of creating a brand new fresh character, they just reuse an old white one?” she said. “How come instead, we can’t make a live-action about Gabriella, a Black, deaf mermaid who knew sign language from the coast of Africa? Now, if you asked me, that would make a way better live-action movie than a remake of an old one. But that’s just my opinion.”