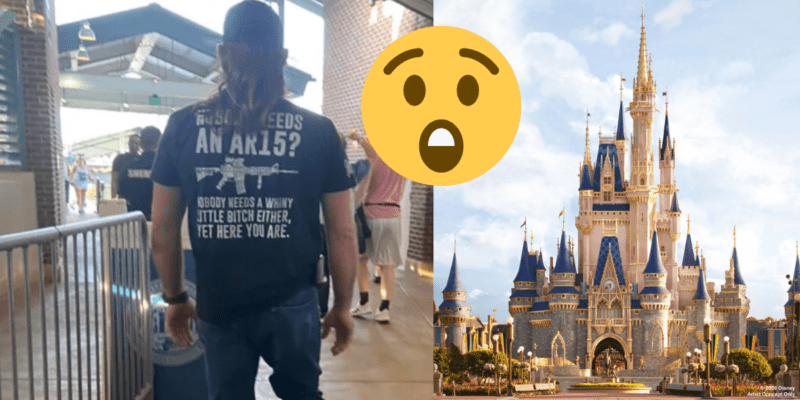 The Walt Disney World dress code has sparked fierce debate on the Internet over the past year after the rise of a TikTok trend in which Guests purposely wore revealing clothing to get a free shirt from Disney Cast Members.

Most of these viral incidents involved women wearing tie-neck or tie-front tops, which aren’t explicitly banned in Walt Disney World’s dress code but pose a risk of untying or getting tangled onboard Disney Park attractions.

With the rise of social media, photos and videos of strange or inappropriate attire at the Disney Parks go further than ever. That was the case last month when someone posted a photo of another Guest they saw at Disney Springs at Walt Disney World Resort wearing a questionable tee-shirt:

The photo, posted to Reddit a month ago by user u/Usual-Elderberry9037, shows the back of a man’s tee-shirt, which boasts a picture of an AR-15 semi-automatic rifle. It reads, “Nobody needs an AR-15? Nobody needs a whiny little b***h either, yet here you are.”

The post received thousands of interactions and hundreds of comments in the “Trashy” Reddit community, where people share photos of “no-class” and “downright trashy” things they see in public.

Reddit user u/Megan_all_along shared a story of inappropriate tattoos they saw at a Walt Disney World Resort hotel, saying that similar profane and inappropriate attire is typical in Florida but mostly stays out of the Disney Parks:

It isn’t as common as you’d see walking around many other places in FL, but it’s definitely there. The first time we brought our young kids there was a big guy walking around with tattoos of naked people having sex on his legs in the shop at our hotel… you do you man, but maybe cover that up in places where there’s going to be a ton of kids around?

Though the photo was taken at the Walt Disney World Resort, it appears to be at Disney Springs, which tends to be more lenient and doesn’t have as intense security protocols as Disney’s Hollywood Studios, Disney’s Animal Kingdom, EPCOT, or Magic Kingdom.

If you’re headed on a Walt Disney World vacation, check out the Disney dress code and err on the side of caution when deciding if a garment is appropriate for the Disney Parks. Dress comfortably for lots of walking and the Florida heat! Disney’s dress code, which can be enforced at the discretion of each Cast Member, reads:

Proper attire, including shoes and shirts, must be worn at all times. The parks are a casual, family-oriented environment. Ensuring that the parks are family friendly is an important part of the Disney experience. In that spirit, we ask you to use your discretion and common sense.

Attire that is not appropriate for the parks—and which may result in refusal of admittance—includes but is not limited to:

Do you think this Guest’s shirt was appropriate for Walt Disney World? Let us know in the comments.