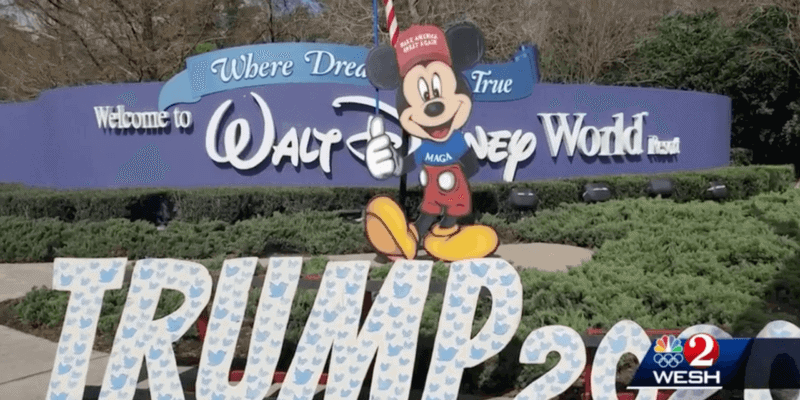 A few days ago, supporters of President Donald Trump decided to hold a little campaign rally on his behalf just outside of Walt Disney World in Orlando, Florida. Specifically at the Hotel Plaza Boulevard entrance by Disney Springs. News of their rally spread across social media mostly thanks to a video that showed Mickey Mouse cutout that featured the character dressed in MAGA (“Make America Great Again”) gear and holding an American flag.

You can read our full coverage of the original story by following the link below:

Well, after that video made its rounds online, Disney’s Reedy Creek Improvement District called the police. Local NBC affiliate station WESH reported that deputies of the Orange County Sheriff’s office arrived on-scene to tell the organizers to relocate. And by “relocate,” they meant “go back on the far side of County Road 535.”

In our original coverage of this story, we mentioned that the small crowd of Donald Trump supporters were pushing the line of how far they could go. Well, it looks like they crossed the line. They were demonstrating on Walt Disney World property.

For those about to cheer or jeer at Disney for taking a political position by calling the cops, you can save your breath. There was no political motivation one way or another from the folks at Walt Disney World. In fact, the Walt Disney World Property Rules prohibit the following:

So, that’s it. It doesn’t matter if they were Trump supporters or not.

Sonksen admitted he and his associates did not realize they were on Disney property. They contacted a lawyer who explained that while the sidewalk is technically a public area, any spillage beyond it into the grass and shrubs that bordered Disney sign is stepping onto private land and can cause an issue.

In short, just assume Walt Disney World owns the whole side. But while their party was relocated, the group received the media attention it was after and that picture of MAGA Mickey Mouse standing in front of the entryway to Walt Disney World is not going away any time soon.

Disney still has not released a comment on the matter.

Related: Woman who wanted to protest at Disney World was banned from U.S.