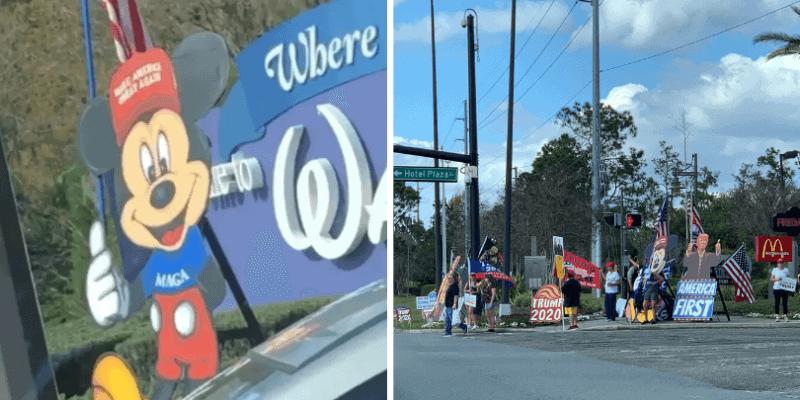 What began as light-hearted fun has again resulted in a storm of fury across the Twittersphere. Today on Presidents Day, some Trump supporters gathered just outside Walt Disney World property to campaign on behalf of President Trump’s re-election, and they decided to have a little fun with it.

Beyond the usual hand-made signs, the MAGA hats, and “Trump 2020” flags, some supporters got a little extra creative. They took a full-size cut out of Mickey Mouse and dressed him in MAGA gear. Redcap and all. Mickey’s smiling and giving a thumbs up to the drivers who pass by.

This appears to be at the Hotel Plaza Blvd Property Entrance. Keep in mind that this is NOT the main Walt Disney World entrance off I-4. This “the back entrance” takes Guests straight to the Disney Springs Resort Area. Just off the property is a plethora of shops and restaurants with parking lots that make it much easier for people to congregate and campaign on this level.

The only harm done here is perhaps copyright infringement and false representation, as The Walt Disney Company has not openly endorsed any political candidate since Dwight D. Eisenhower. However, that doesn’t stop people from being triggered by the sight of Mickey Mouse smiling in a MAGA hat, both for and against.

Here are a few of your supporters in Orlando Florida showing just how much you mean to us!
(At a main entrance to Disney World)

Thanks for all you do!

There are people standing by the Walt Disney world sign with trump signs.. I am DISGUSTED

Now, what’s laughable about these Trump Supporters is that they are indeed testing the line of what is a permittable political statement. Because Walt Disney World does not permit such actions on their property. A Trump Supporter got banned back in 2018 for simply pulling out a small Trump banner and posing with it for his Splash Mountain picture.

According to Walt Disney World Resort Property Rules, the following actions are forbidden regardless of agenda:

Technically, these Donald Trump Supporters campaigned off Walt Disney World properties. The MAGA Mickey prank is the closest any political organization will ever get to sparking their campaigning at any theme Park in Walt Disney World.

Related: Woman who wanted to protest at Disney World was banned from U.S.