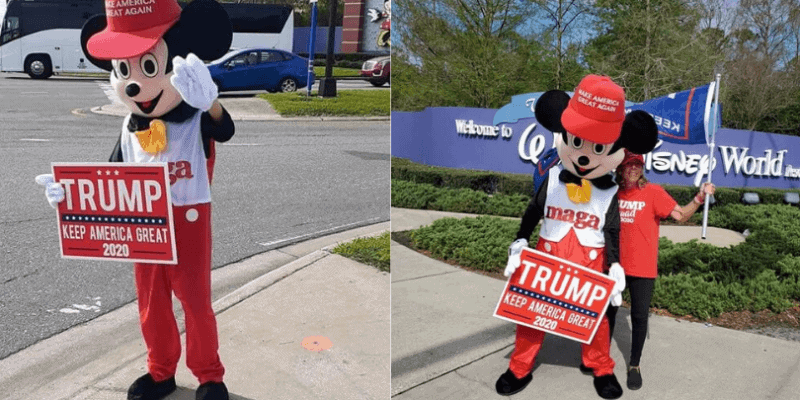 Walt Disney World is scheduled to close on March 16, 2020, and remain closed for the rest of the month due to concerns surrounding the novel coronavirus known as COVID-19. But that hasn’t stopped some determined Trump supporters from campaigning in their new favorite spot. The local republicans gathered for a third time today at the Crossroads entrance of Walt Disney World–the “back door” gateway to the Disney Springs resort area hotels. However, their numbers were much fewer than the previous two rallies and the coverage on twitter is much less as well.

@WaltDisneyWorld @Disney @DisneyParks @WDWToday y’all better get control of this Trump campaigning in a Mickey suit on property. He took the head off for a photo but was putting it back on pic.twitter.com/6V9cCuV5aB

The continued coverage of these events does not in any way express the political views of Inside the Magic or this writer. We’ve continued to cover these events to shed some insights into Walt Disney World itself–namely where this other entrance is located and Disney World’s policy regarding any unsolicited protesting–as well as to point out the ridiculousness both in the outrage of the rally and the rally itself.

There is no word yet of Disney’s local governing organization, the Reedy Creek Improvement District will interfere with the gathering in any way.

A few weeks ago, Inside the Magic shared a story about Trump Supporters gathering at one of the entrances to Walt Disney World property in central Florida. Disney’s local government, the Reedy Creek Improvement District, called the sheriff’s department to have the campaigners move across the street from the actual entrance. They complied, and later that day, ended their demonstration.

But it appears they returned for round 2.

Today, Inside the Magic received a tip that supporters of President Donald Trump once again gathered at the Crossroads entrance of Walt Disney World — the entrance that leads straight to the Disney Springs Resort Area Hotels — and this time they had someone dressed up in an unauthorized Mickey Mouse costume. The group has since dispersed from the area. You can see the initial Facebook post shared to Inside the Magic and a tweet confirming the event below:

The people having the Trump rally have returned to the intersection of Disney and Crossroads. This time they have someone dressed up like Mickey! @Attractions pic.twitter.com/l8eb0CEMM2

“It’s MAGA country everywhere we go,” said one supporter in the video below:

The Return of MAGA Mickey Mouse

One of the more memorable moments of this little rally was the cutout of Mickey Mouse dressed in MAGA gear returning with the crowd as well.

Twitter user Sean Sharrow said that after the group consulted an attorney in February, they were told they weren’t in the wrong.

Thanks for making me and MAGA Mouse Twitter famous. We consulted an attorney after we did this last month and there’s nothing Disney can do. pic.twitter.com/fnBnfwqQ98

The last time President Trump’s supporters gathered at the Disney World gates, they were asked to leave because while the sidewalk was public domain, the landscaping was Disney property. As you can see by the pictures, they learned their lesson and keep to the other side of the sidewalk for most of their picketing.

You can read our full coverage of the first Trump rally here:

We would also like to remind our readers that Walt Disney World takes a harsh stance against any form of unauthorized campaigning regardless of who and what.

According to Walt Disney World Resort Property Rules, the following actions are forbidden regardless of agenda:

At this time, it is not known if the Trump supporters left the area because law enforcement asked them to or not.