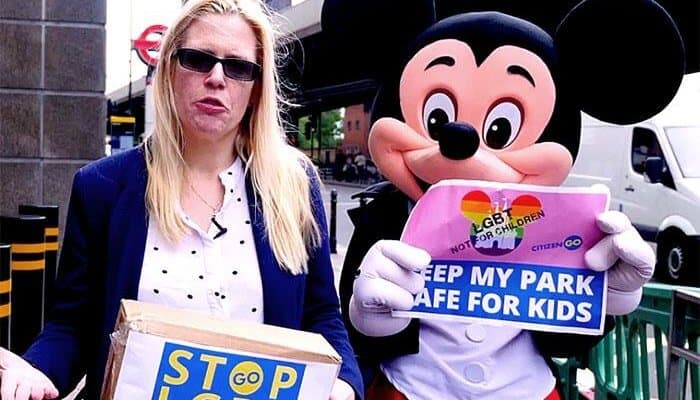 A British woman who planned to protest “LGBT indoctrination” at Walt Disney World had an impromptu change of plans when she was banned from entering the United States instead.

Caroline Farrow, an anti-LGBT+ activist, is blaming LGBT+ people after she was banned from entering the U.S. Farrow was planning to travel to Orlando to protest what she believes is “LGBT indoctrination” at Disney World. She was planning to hand deliver a CitizenGo petition with nearly half a million signatures that is asking Bob Iger and The Walt Disney Company “to stop the LGBT propaganda and gender indoctrination at Disney.”

“LGBT activists continue to pressure Disney to use its influence over millions of children to indoctrinate and encourage them to accept gender ideology,” the petition reads. “And as a result, the family-friendly Disney franchise is becoming a hollow shell of what we have come to love for generations. Now, Disney’s wholesome entertainment is being replaced with LGBT-inclusive events and cartoon characters meant to warp the minds of innocent children.”

This week, when Farrow arrived at the airport and planned to fly to Orlando, she was told she could not board her flight. The activist told LifeSite News that an airline representative told her that her access to the United States had been denied and allegedly gave her no further explanation. She now believes that the LGBT+ activists — who have allegedly been harassing her for months — contacted the U.S. Embassy in the U.K. in an attempt to have Farrow banned from the United States.

So far, there is no proof or explanation for why Farrow was not allowed to board her flight to Orlando this week. But it doesn’t look like she’ll be able to protest “LGBT indoctrination” at Walt Disney World anytime soon.

However, even though Farrow wasn’t able to deliver the petition herself, CitizenGo still delivered it for her today:

This isn’t the first time Farrow hasn’t been able to deliver an anti-LGBT+ petition to Disney officials. Over the summer, she went to Disney offices in London to ask the company to cancel its Disneyland Paris Pride event, the first of its kind to be held at a Disney park. Farrow went to Disney accompanied by what appears to be a Mickey Mouse imposter wearing an unofficial character costume, and her petition was refused and not accepted by Disney.

While Walt Disney World has not hosted an official pride event like the one earlier this year (and planned for next year) at Disneyland Paris, both Disneyland in California and Walt Disney World in Florida have a recent history of advocating LGBT+ pride. In recent years, they have sold rainbow and “Believe in Love” merchandise to coincide with the unofficial Gay Days events that occur at Disney Parks in the U.S. and encourage LGBT+ pride.

The Walt Disney Company is also an Equal Opportunity Employer and doesn’t discriminate against anyone based on their sexual orientation and gender.

This is a developing story that we will update as more information regarding Farrow’s case becomes available.