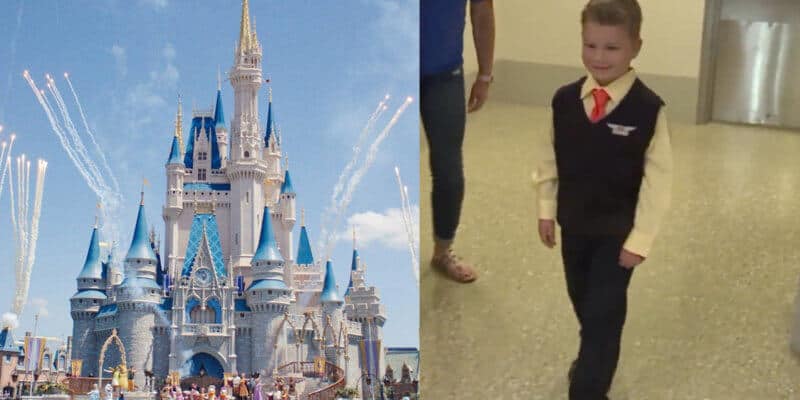 Make-A-Wish Michigan not only sent SJ Awwad (a 5-year-old little boy) and his family to Walt Disney World, they also allowed him to live out one of his dreams, to serve as a flight attendant on his flight.

SJ, who was born with 10 different congenital hearts defects, his organs flipped backward inside his body, and who has already had multiple surgeries always wanted to visit Walt Disney World and serve as a flight attendant on a commercial flight. And on Monday, this all became a reality thanks to Make-A-Wish Michigan and Allegiant Airlines!

During his flight to Orlando, SJ said he wanted to help the flight attendants pass out snacks and drinks and so he did to travelers. Danielle Awwad, SJ’s mom told WXMI, “He was really excited and it’s just been a whirlwind since we’ve been here…Part of his wish was to pass out drinks and snacks on the plane,” Danielle Awwad said.

According to SJ’s Make-A-Wish volunteer, Colleen LaRose, passing out snacks to passengers was a major priority on his trip. To make it happen, LaRose worked with Allegiant Airlines to provide SJ the opportunity. LaRose was even able to took it a step further by coordinating with the flight crew to present SJ with his own Allegiant Air uniform and name tag, which he wore while passing out snacks.

Andrew Porrello, corporate communications specialist with Allegiant Air said, “That was the first time we’d ever heard of that one, he said. “So we were like, ‘This is gonna happen, we are gonna make this happen for sure,’ because usually, we are just the vessel from point A to point B.”

According to Oklahoma News 4, even though SJ got to live out a dream of his by being able to serve as a flight attendant, the trip was even more special because SJ is celebrating his sixth birthday in only a couple of days. And even though the trip was supposed to be about SJ, a priority of the experience to him was being able to help others.

The Awwad family will be spending a whole week at Walt Disney World and Danielle says it’ll be a nice escape for the family. “This whole experience has just been a beautiful distraction from our reality, because it has, its distracted us and given the opportunity to think about fun things, and exciting things instead of appointments and when the next ball is gonna drop, when’s the next procedure, when’s the next surgery,” Danielle Awwad said.

Oklahoma News 4 reports that even though SJ has already been through a number of surgeries, one day he will need a heart transplant.