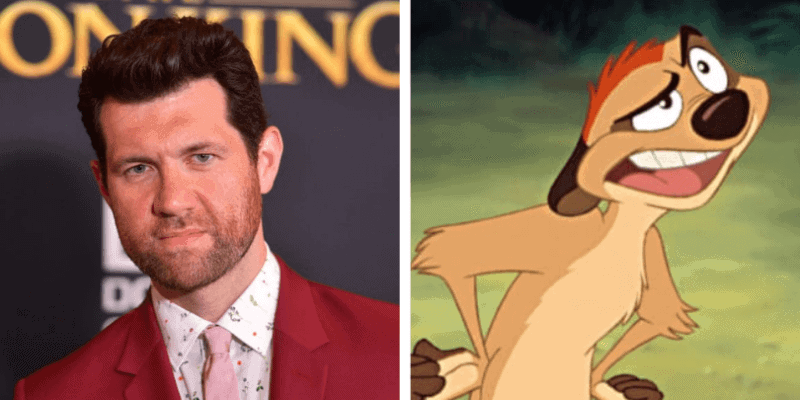 Recent remakes of classic Disney animated films give actors the opportunity to live out their dreams of playing characters they grew up watching on the big screen and home video. And, in the case of Billy Eichner, a role in “The Lion King” was a dream come true. Still, acting in “The Lion King” brought to light issues of representation in Hollywood, particularly within children’s and family entertainment. Eichner, who identifies as gay and voices Timon in Disney’s 2019 remake of the 1990s animated classic, shared in a recent interview with Buzzfeed that there should be more LGBT+ representation in animated films.

In the new film, Eichner stars as Timon, or at least his version of the character, which was a dream come true since the original voice of Timon was Nathan Lane, a role model for Eichner as an actor and a gay man. Eichner spoke with Buzzfeed about how Lane’s Timon is iconic for the world and for Eichner personally, and how happy he is that director Jon Favreau kept alive the tradition of Timon being played by a gay actor.

“I emailed Nathan — one of the first things I did — and I wanted his blessing,” Eichner said. “He gave it to me, and he made some very funny jokes about how I was going to steal other roles of his. And one thing that really helped is that Jon Favreau had Seth Rogen and I improvise a lot, and a remarkable amount of the improv ended up in the movie. Once you’re improvising, you have to be in the moment, you can’t be thinking about Nathan Lane and the original and all of that. And I think that really helped us tap into our version of who the characters were going to be.”

But even though Timon has been voiced by a gay man in both the 1994 and 2019 versions of “The Lion King,” the character is never outright declared as gay. And, as Eichner notes, that’s part of the issue. The actor shared that animated films are one of the last frontiers for LGBT+ representation, stating that members of the LGBT+ community have always had to search for a closeted gay character in children’s and family programming because of the apparent lack of openly gay characters.

“Gay people always had to sort of search for the closeted gay character, because there were no openly gay characters, and we were so thirsty for them,” he said. “I would love to see a world where we don’t have to argue about, you know, whether what’s his name in ‘Beauty and the Beast’ is gay or not. I don’t want it to be subtle or a question mark. It just should be gay.”

Eichner continued to share that in new films, there should be existing openly LGBT+ characters so that audiences don’t have to argue about whether or not characters are straight.

“I want to see actual gay people that are not a mystery,” the actor shared. “The way to move on from all those debates is to just create openly gay characters in children’s programming and family entertainment. I think we’re on the verge of that. You’re starting to see it happening.”

When it comes to Timon, Eichner says he doesn’t think of the meerkat as gay as much as he thinks about his own sensibility and personality he brings to the role. Whether or not Timon is a member of the LGBT+ community, we don’t think we’ll ever know. But one thing’s certain: many critics and fans who have seen the 2019 version of “The Lion King” are saying that Eichner steals the show, and we can’t say we disagree.

What do you think of Billy Eichner’s take on LGBT+ representation in animated films? Let us know in the comments!