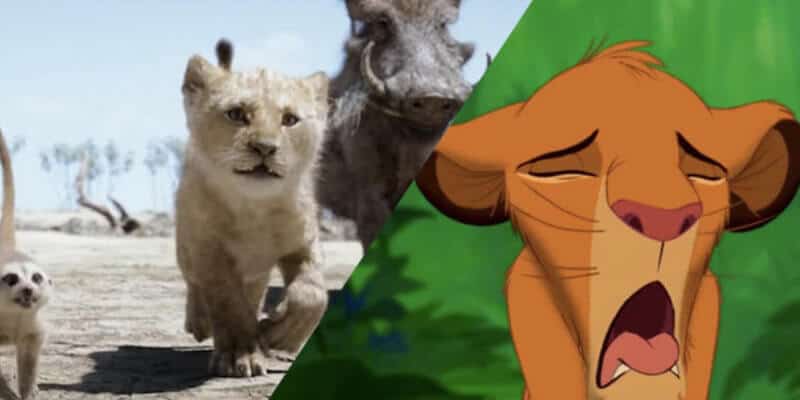 It means no worries, but that isn’t stopping fans from stressing about the all-new version of the “Hakuna Matata” in “The Lion King.” Disney just dropped the video clip for the newly reimagined scene, and while fans are falling in love with the music, they aren’t as enthusiastic about the way the scene looks when compared to the original version.

When you listen to the song by itself without watching the video clip, it’s clear that the performers are vocally talented. We love Donald Glover’s enchanting voice and the fun and witty feeling Seth Rogen and Billy Eichner add to the tune. But when you compare the new “Hakuna Matata” scene to the scene from the fan-favorite animated film of the 1990s, you may be disappointed. Lucky for us, Cartoon Brew did the honors of editing together a side-by-side comparison of both the original and new versions of “Hakuna Matata.” As fans of both films, we have to say that while the all-new version of “The Lion King” has gorgeous effects, an amazing soundtrack, and fantastic voice talents, when comparing the new “Hakuna Matata” scene to the original it’s safe to say the original is far more expressive, colorful, fun, and, well, animated. Take a look for yourself:

Comparison between the two animated versions of The Lion King. pic.twitter.com/E5dfgMASZJ

Clearly, the original animated version of the scene is full of life, color, expression, and fun, and it’s the reason so many Disney fans still love “The Lion King” (and why you can’t visit a Disney park without seeing countless guests in “Hakuna Matata” t-shirts). But the 2019 version of the scene is lifelike in a different way. It lacks visual vibrancy, but it makes up for it in a lifelike adaptation of the animal characters. It isn’t as fun, but it is musically magnificent. There truly are pros and cons to both scenes, and while we love the new film, it’s still understandable for so many fans to disagree with the direction Disney decided to take the movie after seeing the characters in this whole new style.

Here’s what fans have to say about the new version of “Hakuna Matata”:

Also at 0:23 I thought the clip had ended and was looping because there's no variance in anything happening

disney thought they did sumn but this video still has way more feeling than that new hakuna matata footage pic.twitter.com/NTj0QXgDch

Did anyone else think that Hakuna Matata clip looked like something out of this movie? pic.twitter.com/wmlgHbHmbo

THIS is the new Hakuna Matata scene?!… oh no #TheLionKing pic.twitter.com/oMHUqh0SJf

This seems to confirm my fears ☹️ There is just no personality there. In remaking this with photo realistic visuals, they have forgot what made the original animation so special. Thoughts? X x x pic.twitter.com/cxpzf3iTUE

When it comes to Disney movie remakes, it’s definitely hard to please everyone. But to the fans who are worried about whether this scene will make or break the film, we say “Hakuna Matata.” We’ll be rewatching the movie as much as we can in theaters (or at least until it makes its debut on Disney+).

What do you think of the new version of “Hakuna Matata”? Let us know in the comments!