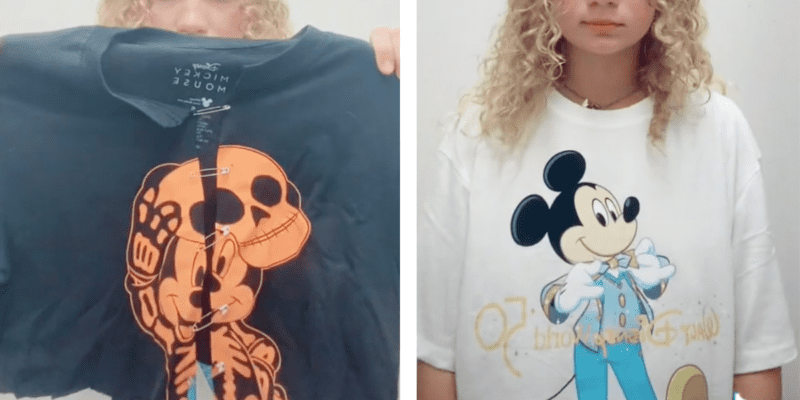 The Disney Dress Code has been in the news a lot this year – most recently after a Guest entered Disneyland Resort wearing an inappropriately sexual tee shirt but wasn’t forced to change. In another incident in July, a Guest wore a full-length ball gown to Disneyland Park and was told to change because it was a safety issue.

Most notably, though, was the TikTok “dress-coded” trend. It started with a video by TikTok user Amanda DiMeo, who uploaded a video to her over 800,000 followers explaining how to get “a free Disney shirt of your choice.”

In the video, which got picked up by FOX News, DiMeo wore a cropped shirt that didn’t comply with Walt Disney World’s dress code and was given a voucher by Cast Members to get a free shirt at a Disney Park merchandise location.

Recently, however, Disney seems to have changed its policy. In a viral video from earlier this month, TikTok user Nicole DeLosReyes showed herself walking away from EPCOT after being turned away for wearing a tie-front shirt. She was told to either purchase a replacement or change, leading fans to speculate Walt Disney World has cracked down on giving away free shirts to combat the trend.
Multiple other TikTokers have posted similar experiences at Magic Kingdom, Disney’s Hollywood Studios, and Disney’s Animal Kingdom, including Maddie (@secretlife0fmaddie), who visited Walt Disney World Resort this week and posted this video:

In the video, Maddie shows the shirt she wore that violated Disney’s dress code. It’s a black graphic tee shirt cut in the front, and safety pins are holding it together. She explains she was told to purchase a new shirt or leave and shows the white Mickey Mouse 50th Anniversary Celebration tee shirt she bought.
Some commenters accused Maddie of wearing the shirt on purpose, but she said she had no idea it would break the dress code. Others explained it was likely a safety issue – like in other instances with tie-front shirts, the fastens could come apart on an intense ride, or a safety pin could get caught on something. @causeimthemama wrote:

They quit doing free ones since people kept taking advantage of them. It’s not the length it’s how it’s held together

A few commenters said Disney Park Cast Members should have given Maddie a free shirt if she wasn’t going to be allowed to enter. @norissa69 wrote:

Others said the shirt shouldn’t have been allowed because it showed too much skin. “It’s a family park,” @freckles486 wrote. “And it’s called freedom to wear what the h*ll u want,” @maddiex2711 replied.
“It’s their place, if you gonna come dressed that at a kids place then leave,” @theyluvoj said. “It’s Disney not a club.”

If you’re unsure if an outfit violates the Disney dress code, it’s best to err on the side of caution. We recommend you wear lightweight, comfortable clothing and supportive shoes to the Disney Parks.

Do you think Guests should be given a free shirt if they violate the Walt Disney World or Disneyland Resort dress code?