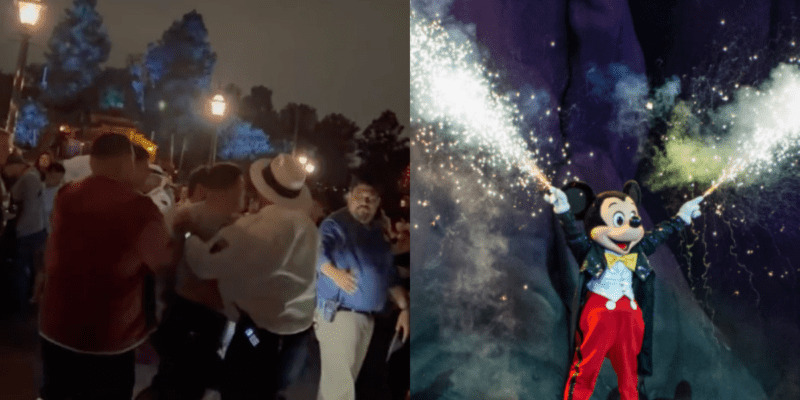 Fantasmic! returned to Disneyland this weekend after its closure during the ongoing COVID-19 pandemic.

On its first night, the dazzling nighttime spectacular at Disneyland Park went off without a hitch, but some audience members weren’t so lucky.

Two videos posted to social media show a brawl between a few grown adults near Pirates of the Caribbean, where Guests were gathered waiting for Fantasmic! to begin. In the videos, onlookers disperse and shout while a few Disney Security Cast Members attempt to break up the fight.

Another Guest, Instagram user @brantasmic posted footage with audio, where you can hear the shouts between the fighting Guests, security Cast Members, and panicked onlookers. A Twitter user, @nickdean707, reposted it here:

Two other Guests shared witnessing the brawl, which led to the involved Guests getting escorted out of Disneyland Park. @Snugzmeow on Twitter wrote:

You really have to love Fantasmic to get kicked out of Disneyland forever over it, I admire it tbh

You really have to love Fantasmic to get kicked out of Disneyland forever over it, I admire it tbh

This fight is just one of many in an increasing trend of violent altercations between Guests at the Disney Parks. It’s not certain whether more fights are actually occurring, or if social media and smartphone cameras just make it easier for more people to witness these disturbing incidents.

If you’re looking forward to seeing Disneyland’s updated Fantasmic! or its upcoming return at Disney’s Hollywood Studios in Walt Disney World, be sure to check out all the changes to the show. Fantasmic! appears twice each night at Disneyland Resort at 9:00 PM and 10:30 PM. From Disney:

Have you ever seen a bizarre interaction at Disneyland or Disney California Adventure? Share your experience with us in the comments!