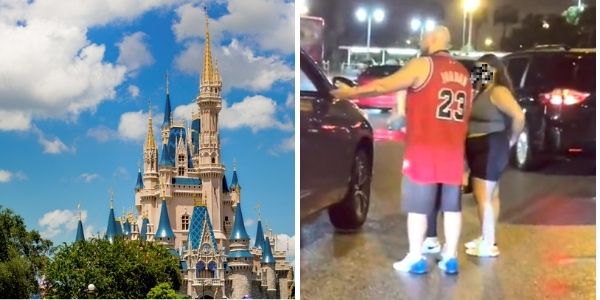 While a visit to “The Most Magical Place on Earth” may seem like the perfect vacation destination, sometimes things can go wrong. Despite all of the fun Guests can have at the Magic Kingdom, EPCOT, Hollywood Studios, and Animal Kingdom, sometimes tensions can rise and Guests can engage in fights with other Guests or even Disney Cast Members.

This is not a common occurrence, and when altercations do break out, please be sure that Disney security is well-equipped to deal with any situation to ensure Guest safety. Guests are quite safe when inside the Walt Disney World Resort and can rest assured that any issues are taken care of quickly.

In the past, we have seen quite a few fights break out in Disney, from Guests’ fist fighting on Main Street U.S.A. to obscenities being shouted at Cast Members in front of “it’s a small world”. Recently, an argument broke out at the exit of one of the four Disney World Parks.

Meathead leaving Disney world tries to start a fight with his Uber driver in front of his kids.

Meathead leaving Disney world tries to start a fight with his Uber driver in front of his kids. from trashy

As you can see in the video, the Guest had issues with their Uber driver, resulting in shouting and yelling in the Parking lot of one of the Walt Disney World Parks. We are not sure exactly which Park this happened in. The Guest who was there and recorded the incident responded with this:

I wish I knew. Just looked up and he kept saying that over and over so I started recording. I think he had too many people for the vehicle and the driver complained.

Disney World has a long list of rules Guests must follow unless they want to get kicked out of the Parks. Check out our ultimate list of everything you need to know here. More on Walt Disney World’s rules are below:

Have you ever witnessed something like this at Disney?