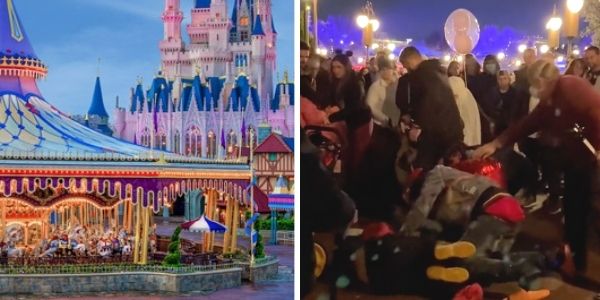 Even at “The Most Magical Place on Earth” tensions can run high and fights can break out.

When visiting the Walt Disney World Resort, you tend to picture the perfect vacation for all ages. With iconic rides like Splash Mountain, “it’s a small world”, Pirates of the Caribbean, and Haunted Mansion, as well as classic characters like Mickey and Minnie Mouse, it’s hard to imagine things going wrong. But sometimes, altercations take place between Guests, and unfortunately, these sometimes result in physical violence.

As shown in a video posted to TikTok, at least three Guests were involved in some sort of argument which resulted in one Guest being tackled and beaten by the other Guests. See the full video from @disneyax below:

Fight at Magic Kingdom …..what happened to the magic ? 😟#magickingdom #wow #waltdisneyworld #thehappiestplaceonearth#orlandoflorida

As seen in the video, the evening crowd at Main Street, U.S.A in the Magic Kingdom were stunned after witnessing a fight break out right in the middle of the Park. It is unknown what caused the fight or who was involved exactly, but when looking at the video it appears it took place between three different Guests. While it does not appear anyone was seriously injured, it is a sad and unfortunate thing to happen not just at Walt Disney World but anywhere. In the video, we can see a Cast Member is able to break up the fight and ensure the surrounding Guests remain safe. It seems the creator of the video added the Happily Ever After track to the back of the clip as an added sound.

This isn’t the first time a fight has broken out at the Disney Parks. Earlier last year we covered an altercation that took place just after Guests exited the Living With The Land attraction in EPCOT of all places. We also wrote about a verbal fight between a Guest and Cast Member over a stroller that was parked next to the Prince Charming Regal Carrousel. It seems as though the ongoing COVID-19 pandemic has not helped to keep tensions down either, as many Guests have reported or even captured videos of Guests not following rules resulting in fights breaking out.

Please know that fights such as this are not permitted to take place on Walt Disney World Property. Actions such as this can leave others injured, and result in the Guests involved being removed from the Park, or taken by the authorities, depending on the severity of the situation.

Have you ever seen a fight like this happen while at Disney World? Let us know in the comments below!