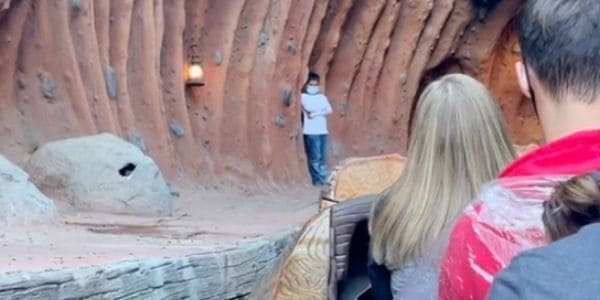 While Disney may be the “most magical place on earth”, things can still go wrong sometimes. With stunning and iconic attractions like Space Mountain, Star Wars: Rise of the Resistance, Guardians of the Galaxy: Mission Breakout, and the Matterhorn Bobsleds, Disneyland is truly a fun-filled and magical place. Except when your ride gets stuck in a Disney Park.

A ride getting stuck or shutting down shouldn’t come as a surprise to seasoned Disney Guests as most rides are very complex like both attractions at Star Wars: Galaxy’s Edge. But one thing that would shock anyone is a Guest hopping out of the ride vehicle, which is exactly what happened the other day at Disneyland.

In a TikTok posted by MagicallyTanna (@magicallytanna), Guests can be seen backed up on Disneyland’s Splash Mountain with a kid standing outside the ride. See the full video below:

Finally, the ride went through a full evacuation, and all Guests exited the ride. Everyone received fast passes for other rides in the Park.

More on Splash Mountain at Disneyland below:

Have you ever seen someone jump out of a Disney ride? What’s your craziest Disney ride story? Let us know in the comments below!