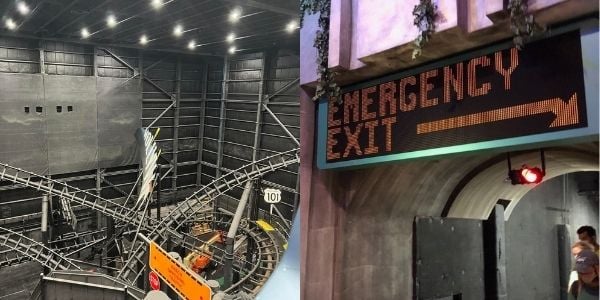 It’s a little easier to “Walk This Way” when all the lights are on right?

Walt Disney World offers Guests so many exciting and thrilling attractions such as Space Mountain in Magic Kingdom, Expedition Everest in Animal Kingdom, and The Twighlight Zone Tower of Terror in Disney’s Hollywood Studios. And Speaking of Hollywood studios, this Park has quite possibly the most thrilling ride of all the four Parks.

Rock ‘n’ Roller Coaster Starring Aerosmith is an intense, fast-paced experience like no other on-property. Featuring multiple inversions and a nearly 0-60 miles per hour launch, this ride is a blast from beginning to end. But for a few unlucky Guests, or super lucky depending on how you look at it, the attraction got stuck mid-ride, letting Guests take a view of the attraction with all the lights on during the eventual evacuation.

Thanks to pictures and descriptions of what happened provided by Guests to Inside the Magic, we have some incredible views of this ride you don’t get to see every day. Linda Martin, one of the riders who got stuck on the ride described their experience:

On Monday Rock n roll roller coaster broke down. We did single rider. My husband’s car was stuck at the very top.(thankful it wasn’t me)and mine was stuck at the bottom. I still got to walk through the ride with the lights on. The first 2 pictures are his at the top the others are mine. Best part is we each got 2 multi experience passes.

Danny Goulart, another one of the many Guests to get stuck, gave their take on what happened:

So this happened yesterday at HS, Aerosmithbroke down at the very top, interesting walk down to the bottom with the lights on…

Both Guests were unsure of what caused the stop, but that didn’t stop them from taking some incredible photos and videos as they were evacuated off the ride.