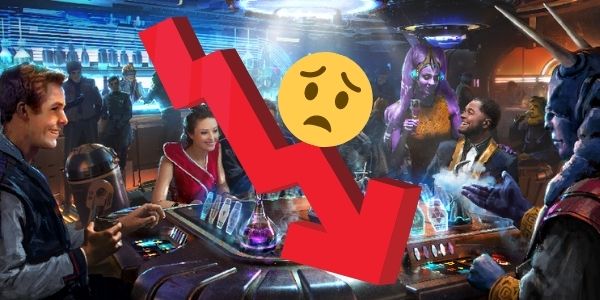 Do you have a bad feeling about this?

The anticipation for Walt Disney World’s newest hotel and Resort, Star Wars: Galactic Starcruiser, has been suspenseful, exciting, and more recently, maybe a little worrying. After a sneak preview of the hotel was removed by Disney itself due to massive amounts of backlash, as well as a welcome video receiving the same reception from fans, the confidence in both Disney and Guests is beginning to waver.

With reports of cancellations pouring in for this incredibly immersive and incredibly expensive hotel, the future seems a bit spotty at the moment. A recent post on social media highlighted this very problem.

We’ve recently covered cancellations for the Resort and recently, a Reddit thread highlighted the same problems. The thread gained some serious traction with nearly 100 people commenting on the post which asked users if they had made reservations for Star Wars: Galactic Starcruiser and if, after seeing the initial videos of the Resort, they are planning to cancel their stays aboard the Halcyon Starcruiser.

“We booked the middle tier just before the video released, and we’re pretty pissed about it. We’re absolutely cancelling. The price for this experience is STEEP, but we love Galaxy’s Edge and figured they would be able to deliver. I can’t fathom where all my money is going for what’s included. I feel like we got scammed by Disney here. Not sure if we’ll be visiting Batuu and time soon after this…”

“I made a reservation for July and canceled it after the trailer didn’t show me any reason to spend $6000 for 2 nights. I’ll wait for the reviews and hopefully a price drop before I consider booking again.”

“I also dropped my reservation I had for April. My nephew actually made the decision for me as he’d rather ride Velocicoaster after seeing the promo stuff. The more I ponder the Promo material they’ve been letting out the more right my nephew becomes. This would have been a $5,400 two day trip. It’s a shame really.”

“Booked during AP window, cancelled last week. Promo material made it clear that this wasn’t worth the price at this time.”

While these are simply comments on a Walt Disney World Reddit thread, these still are quite concerning for the future of Star Wars: Galactic Starcruiser and Disney itself. The $5,000+ price tag for this hotel certainly keeps a big portion of Guests from being able to afford a stay as well as sets extremely high standards for Guests who are finally able to experience the hotel.

Did you book a stay at Star Wars: Galactic Starcruiser? What are your initial thoughts on the resort after seeing the videos Disney posted of it?