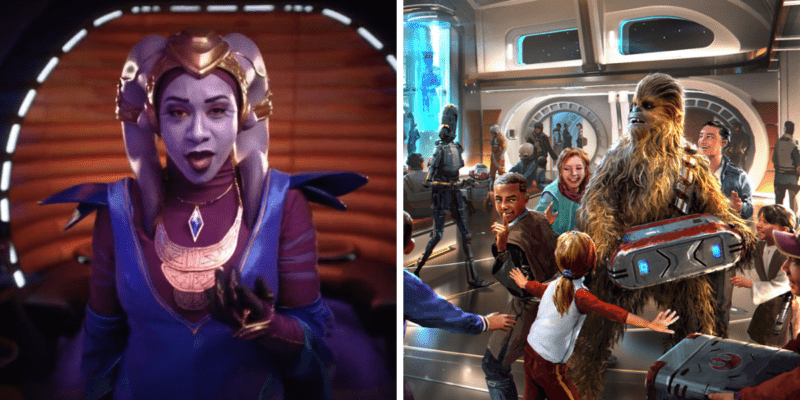 Star Wars: Galactic Starcruiser is the hot ticket for Star Wars fans when it launches in March 2022.

Disney fans have now been treated to a second sneak peek look onboard the Halcyon, including live entertainment in the hotel’s bar.

At a recent Destination D23 event held in Disney’s Contemporary Resort at Walt Disney World, Chairman of Disney Parks, Experiences and Products Josh D’Amaro revealed his own experience onboard the Galactic Starcruiser with a sneak peek video.

Fan reaction to D’Amaro’s video was not positive, with many calling the Halcyon’s bridge and lightsaber training “pathetic” and “underwhelming”. Most Star Wars fans agree that the Starcruiser does not look up to Disney standards of Imagineering and are hoping that the hefty price tag lives up to expectations in March.

The new video released for the Disney holiday special again shows off the Starcruiser’s bridge as well as live entertainment from the mysterious Gaya character.

The Goldbergs actor Sean Giambrone got a special preview of the upcoming hotel from Disney Imagineer Ann Morrow Johnson.

Giambrone was able to send the Starcruiser to Hyperspace, walk the hallways of the new hotel and hear a performance from galactic superstar Gaya.

The song heard in the performance is unique to Galactic Starcruiser, but her song “Oola Shuka” can be heard at Oga’s Cantina in Batuu at Disney’s Hollywood Studios.

Keep up to date with Inside the Magic to hear more news about the Halcyon from a galaxy far, far away.

Have you booked a stay on the Galactic Starcruiser? Are you excited to see Gaya perform?