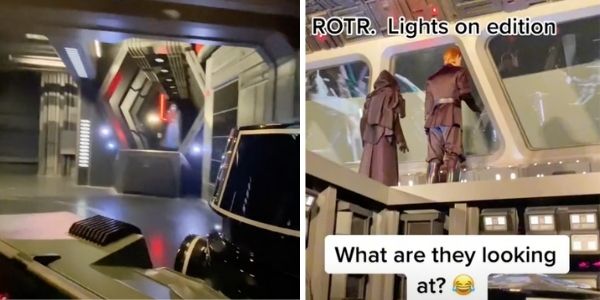 In recent years, Walt Disney World and Disneyland have both stepped up their attraction game quite a bit, offering incredible, state-of-the-art experiences that completely immerse Guests into the attraction. Flight of Passage in Pandora – The World of Avatar at Disney’s Animal Kingdom is a jaw-dropping good time, and the upcoming TRON Lightcycle/Run coaster will be sure to please thrill chasers once it opens in Tomorrowland at the Magic Kingdom. However, Star Wars: Rise of the Resistance, located in Star Wars: Galaxy’s Edge is perhaps Disney’s most ambitious and high-tech attraction, featuring multiple ride systems and amazing animatronics, at least when things go to plan.

In a recent TikTok posted by Minnie Mouse @minnieearsmagic), the attraction can be seen grinning with all of the lights on! See the full video below:

Related: Is It Possible to Escape This Disney Ride During a Breakdown?

As stated earlier, this ride is extremely complex and high-tech, meaning breakdowns are pretty frequent. Another TikTok posted by Falcon Terror (@falcon.terror_vr) shows the ride coming to a complete stop with Guests stuck in the dark while sirens blare creating a pretty unsettling experience. See the video below:

Second time getting on at Disneyland, and it was worth it. #disneyland #starwars #riseoftheresistance #breakdown

Second time getting on at Disneyland, and it was worth it. #disneyland #starwars #riseoftheresistance #breakdown

Related: Guests STRANDED on Disney’s Rise of the Resistance as Sirens Blare

How to Experience Star Wars: Rise of the Resistance

The use of the virtual queue is currently paused at Star Wars: Rise of the Resistance. Guests may experience the attraction using a traditional standby queue. Availability of a standby queue may be limited and is subject to change at any time without notice. Virtual queue may be used again at a later date or from time to time. Experiencing the attraction is not guaranteed.

If you ever have to evacuate a Disney attraction, do not fret! A Cast Member will always ensure you can exit safely, and oftentimes, Guests will receive a Lightning Lane pass so that they can bypass another standby queue to make up for their lost time.