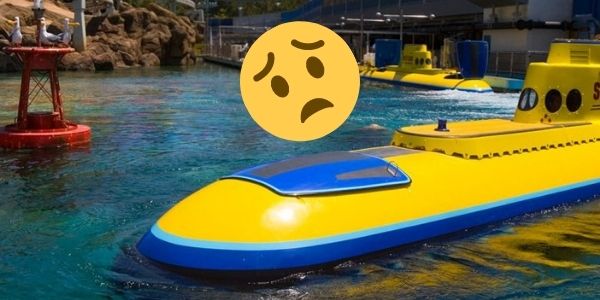 You may need to come up for air at some point.

Disneyland is home to some of the most iconic and classic Disney attractions like Splash Mountain, Mr. Toad’s Wild Ride, and Space Mountain. But one ride tends to get overlooked sometimes when discussing classic Disney rides. Disneyland’s Finding Nemo Submarine Voyage is an amazing attraction that takes Guests on an incredible journey through the seas in an experience so magical only Disney could create. But have you ever wondered what would happen if the ride ever broke down and you were trapped in Disney’s “underwater” submarine?

It is always interesting to watch ride breakdowns at Disneyland and Walt Disney World and it is even more interesting to know what exact procedures Cast Members have to follow to make sure all Guests remain safe. A recent TikTok goes into all the water-soaked details and shows the evacuation procedures work on this ride. See the full video below:

For those unable to navigate the narrow steps down into the submarine, you can proceed to the Observation Outpost at the end of the dock. Manned by a member of the N.E.M.O. Institute, this facility offers a high-definition, live-feed video version of the voyage via onboard “SubCam.”

The original Submarine Voyage debuted on June 14, 1959 and was one of the first “E” Ticket attractions. The attraction was loosely inspired by the 1958 voyage to the North Pole by the world’s first nuclear-powered submarine, the USS Nautilus, which shares its name with the fictional submarine in 20,000 Leagues Under the Sea.

The attraction enjoyed a 39-year run at Disneyland Park, setting sail for the last time on September 7, 1998. The current attraction uses the same lagoon and submarines as the original

Have you ever been evacuated off of this attraction? What’s your craziest ride breakdown story? Let us know!