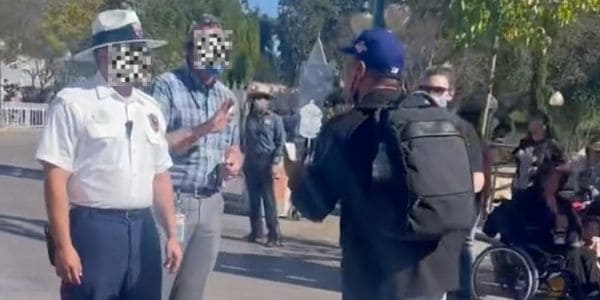 While a visit to the Magic Kingdom or California Adventure may seem like the perfect vacation destination, sometimes things can go wrong.

When visiting the Walt Disney World Resort, you tend to picture the perfect vacation for all ages. With iconic rides like Splash Mountain, “it’s a small world”, Pirates of the Caribbean, and Haunted Mansion, as well as classic characters like Mickey and Minnie Mouse, it’s hard to imagine things going wrong. But sometimes, altercations take place between Guests and Cast Members.

From ride breakdowns to fistfights on Main Street U.S.A., Disney can’t always control what happens on its attractions and between Guests. And speaking of Guests, recently one TikTok user posted a heated encounter one Disneyland Guest had with several Cast Members. See the full video from @jadebear67 below, but please be aware of the vulgar language that is used.

Later on, @jadebear67 posted a few messages from alleged “it’s a small world” Cast Members who claimed to know what the issue was. Supposedly, the Guests in the video were asked to park their stroller somewhere else, after which they got mad, calling the Cast Members “dumba****” and “b**** a** m*****f******”. They also claimed that the family was “trying to play the victim” as Disney does not call security on Guests for no reason.

More on “it’s a small world” at Disneyland:

Have you ever witnessed an encounter like this at the Disney Parks? Let us know in the comments below.