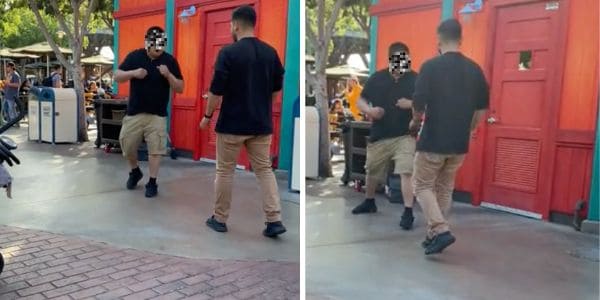 When visiting the Walt Disney World Resort, you tend to picture the perfect vacation for all ages. With iconic rides like Splash Mountain, “it’s a small world”, Pirates of the Caribbean, and Haunted Mansion, as well as classic characters like Mickey and Minnie Mouse, it’s hard to imagine things going wrong. But sometimes, altercations take place between Guests, and unfortunately, these sometimes result in physical violence.

One bizarre altercation recently took place at Disneyland which was shared on Reddit:

Caught some of the fights yesterday at Pacific Wharf

Caught some of the fight yesterday at Pacific Wharf from Disneyland

Related: Guests Convinced Disney is Back to Normal After Crowds Flood Park

We are not sure what happened after the short video was cut off. This is far from the first time we have seen physical violence in the Parks. While the Disney Parks may seem like a magical place filled with unlimited possibilities, Guests are still required to follow the rules.

Fighting is never allowed or tolerated within the Disney Parks and we have seen instances of issues like this in the past, all resulting in Guests getting kicked out after disobeying the rules and regulations of the Resort.

Have you ever seen a fight at the Disney Parks?