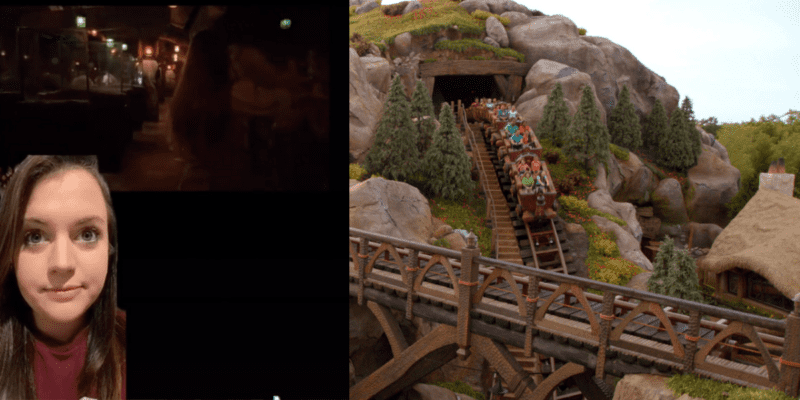 Live streaming is a hot topic in the Disney Parks fan community. The practice is largely banned at Tokyo Disney Resort, and many Guests hope the strict streaming policy will make its way to Disneyland Resort and Walt Disney World Resort.

While Disney Park Guests feel live streaming is disruptive, some Disney Cast Members say it can be much worse. Kala (@kalainthekingdom) explained on TikTok that a well-meaning live streamer nearly got her in trouble at work:

“As a Cast Member… we don’t want to be in your live streams,” Kala said. As a content creator herself, she said she purposefully avoids including anyone else in her videos. “It’s just disrespectful,” she argued.

Kala was working at Seven Dwarfs Mine Train in Magic Kingdom when the live streamer came through her line. She needed two Guests to fill a train, so she decided to make some magic and pull the live streamer and another Guest out of line. She gave them their favorite seat on the coaster.

The Guest excitedly said thank you, then filmed herself putting cash in Kala’s hand. Attractions Cast Members aren’t allowed to accept tips, and a video of Kala taking money from a Guest could risk her job.

“This woman just gave me money, and my coordinator is just watching me take it… I don’t know what to do,” Kala recalled. “I’m like, I can’t be a jerk and just deny it on the live stream, you know? I’m like, what do I do? So I just took it, and I’m like, thanks, whatever, and then I had to give it away.”

Later, Kala found the video on the live streamer’s YouTube channel. She posted the clip on TikTok as proof of the interaction:

“Kala, this is for you. Have a Starbucks on us, girl,” the live streamer said after filming herself giving Kala money. “Thank you for the magic. I appreciate it!”

Kala pleads for other content creators to leave Disney Cast Members out of their content. “Don’t be putting my face all up in your live stream. You didn’t ask me if I wanted to be in it,” Kala said. “I was literally just being nice, trying to make some magic. You didn’t ask. Don’t put me in it. As a content creator, I go out of my way to be respectful for people, so other people need to give the same courtesy, especially to Cast Members, because we don’t like it when we’re trying to work.”

It’s important to note that Kala is a Cast Member but doesn’t speak for The Walt Disney Company or the Disney brand.

Seven Dwarfs Mine Train became Walt Disney World Resort’s only Snow White and the Seven Dwarfs (1937) attraction when the New Fantasyland expansion opened at Magic Kingdom in 2012. From Disney:

Whistle While You Wait

Before embarking on your mine train adventure, try your hand at jewel sorting, then wash them with water spigots that play tunes you’ll recognize. When you come across a collection of wooden barrels overflowing with glowing stones, turn each barrel and watch as the ceiling above you is transformed.

Don’t miss the notes that Doc left for you!

What do you think of live streaming at Disneyland Resort and Walt Disney World Resort?