The New Fantasyland expansion of the Magic Kingdom has come a long way since it was first announced at the 2009 D23 Expo, not only in construction, nearing its grand opening later this year, but also in terms of Guests’ experiences will enjoy within. Over the past three years, Walt Disney World has made major modifications to concepts of what would be included in the new area, dropping and adding major components based on fan feedback and reevaluation of what they considered would be the most entertaining attractions.

It’s interesting to look back on and compare the concept art Disney has released, showing the changes made to the expansion design, some subtle, some not so much.

Click to enlarge each of the images below and take a closer look.

When first announced, New Fantasyland included many elements that remain part of the expansion today: Be Our Guest restaurant and a surrounding “Beauty and the Beast”-themed area, a ride based on The Little Mermaid, and the relocation and enhancement of Dumbo the Flying Elephant. But a variety of elaborate Disney Princess meet-and-greet opportunities were also part of the project, each located within individual princess cottages, including Snow White and Aurora (Sleeping Beauty). Also included was a large Disney Fairies area dubbed Pixie Hollow to be completed as the expansion’s last phase. Fans quickly voiced their concerns with parts of this princess-centric expansion, and in the months that followed, Disney heavily modified their design and artwork.

The finalized concept for New Fantasyland, ready just in time for the 2011 D23 Expo, replaced the princess cottages with the Seven Dwarfs Mine Train, an inventive roller coaster featuring Imagineer-created rocking ride vehicles. Storybook Circus became the new home for Dumbo, taking over the land previously earmarked for Pixie Hollow. Not depicted in the artwork is Princess Fairytale Hall, retaining the original princess meet-and-greet concept but moving it into one central location, replacing the now-closed Snow White’s Scary Adventures ride.

Now, with construction drawing close to completion on the Fantasyland Forest (or Enchanted Forest) section of the expansion and a grand opening date set for December 6 of this year, Disney has released what they’re now calling “signature images,” including an updated version of the overview concept art they’ve been using to show the entirety of New Fantasyland in one all-encompassing picture.

While retaining the same basic elements as the most recent concept art, the new “signature image” offers a far more idealized view of what the expansion will look like when completed, showing concrete walkways instead of dusty paths and replacing the real-life backstage areas, roads, and apartments behind the Magic Kingdom with scenic rolling hills and mountains, certainly not part of any Florida landscape, but definitely present in the imaginations of anyone who visits this fantasy-filled world.

Putting all three pieces of New Fantasyland overview concept art next to each other offers the best look at the evolution of this major expansion throughout the last few years: 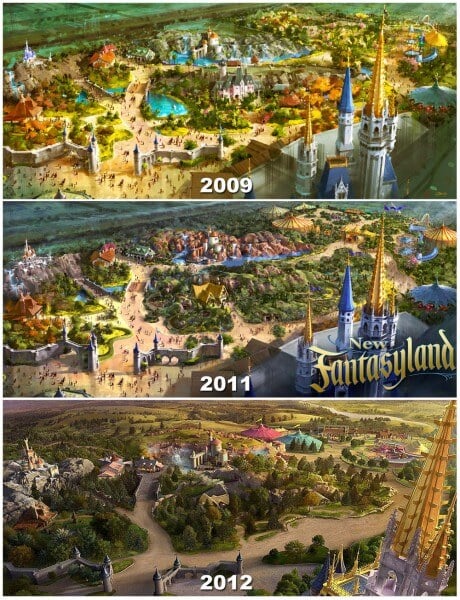 Along with the new “signature image” above, two other new images were released, spotlighting the areas of the expansion devoted to “Beauty and the Beast” and “The Little Mermaid”: 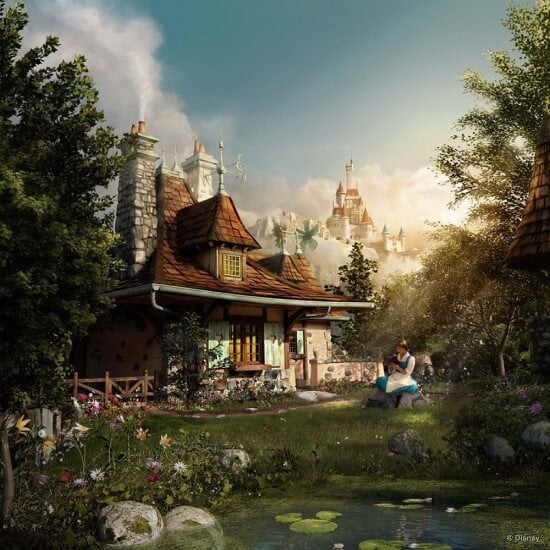 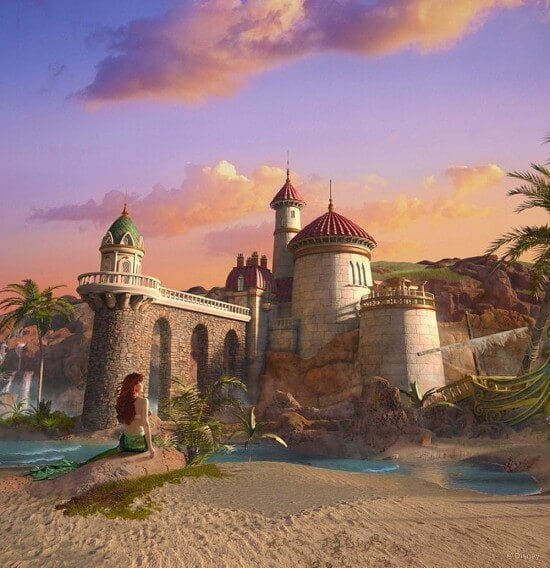 While the entirety of the New Fantasyland expansion won’t be complete until 2014 when the Seven Dwarfs Mine Train opens, the area’s grand opening will be held on December 6, 2012, with previews for all Magic Kingdom park Guests beginning November 19. Guests will finally begin to walk through the lush areas depicted in the artwork above in just a few months, changed from its initial reveal a few years ago but sure to be even more stunning in person.