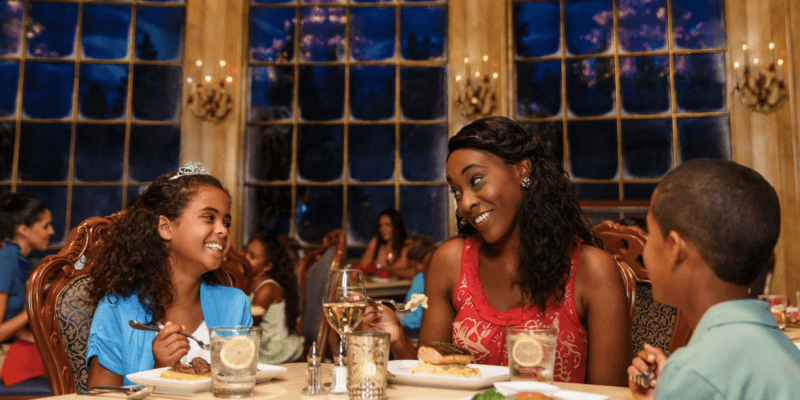 Hey there, Beauty and the Beast fans! If you’ve ever had the chance to experience and dine in the Be Our Guest restaurant, then you know the feeling of becoming awestruck with just how identical the space is to the classic Disney film. Disney Imagineer Gary Landrum has taken fans inside Disney World’s Magic Kingdom to share some secrets about the restaurant’s design.

Disney’s Beauty and the Beast was released in 1991 by Walt Disney Animation Studios and became a Disney classic love story many have come to cherish. If you’re not familiar with the story, a young selfish prince is cursed after revealing his cold heart to a disguised enchantress and is transformed into a hideous Beast. He comes to find that his heart and humanity can be changed by Belle’s love and compassion.

In 2012, Be Our Guest restaurant became a quick-service and table-service option and was added to Fantasyland in Walt Disney World’s Magic Kingdom Park. The restaurant was named after the iconic Alan Menken song “Be Our Guest” in the Beauty and the Beast film.

Secrets Behind the Be Our Guest Castle

Travel + Leisure joined Disney Imagineer Gary Landrum as he shared stories of the Be Our Guest restaurant design process.

The incredible Imagineers came up with a theme for Guests to experience when walking inside Beast’s castle. During his tour of the popular dining establishment, Gary said, “Here we are at the Be Our Guest restaurant and the design of the restaurant has a theme to trace the evolution of the Beast’s heart throughout the story.”

Above the entrance doors, the stained-glass windows remind Guests of the beginning of the film, when the Prince turns away the poor old beggar woman after she offers him a rose in the trade for a night’s stay. The entrance to the castle is where the story began, and as Guests are welcomed inside, the tale unfolds.

The entrance way is filled with stone statues, gargoyles, and other hard materials that represent the Beast’s, cold heart. Landrum stated, “But, of course the Prince isn’t a total loss, so there’s just a little bit of softness in two tapestries that we find in here. You see a lion that represents the strength of the Beast, and on the other side of the archway, is a unicorn that represents either the innocence of Belle, or perhaps even the innocence of the young Prince himself.”

As Gary walked through the entrance way into the armory room, it becomes apparent that there is a bit of elegance in the carpeting on the floor and in the suits of armor in this space. Guests can admire that the suits of armor feel as if humans once lived in this castle.

Gary then introduces The sitting room, where Guests can order their French-inspired cuisine before entering the three royal dining rooms. Gary mentioned, “This is the first time you see wood represented. You have lots of drapery. There’s a fireplace and, so, it’s in this room where Belle treated the Beast’s wounds and literally started to melt his heart.”

And, finally, the iconic ballroom — Guests are enchanted with three gold chandeliers and the massive size of this stunning room where Belle and the Beast fell in love. This royal dining room reminds of how Beast, once cold and cruel at the entrance of the castle, started the process of once again becoming the kind and loving Prince Adam, dancing the night away with Belle.

Gary said, “So, just the progression of moving through the restaurant tells the story of the evolution of the Beast’s heart throughout the fairy tale.”

As Guests leave the castle, they see the beautiful stained glass featuring Belle and Prince Adam dancing with an enormous rose that represented his curse — and how the love they shared broke the spell.

If you are interested in seeing the full interview, check out the design secrets of Be Our Guest (6:15-8:25) on the Travel +Leisure video below:

Have you been to the Be Our Guest restaurant in Walt Disney World? Let us know in the comments below!

Are you planning a Walt Disney World vacation soon and need some help? Our friends at Academy Travel can guide you to your perfect Disney trip!