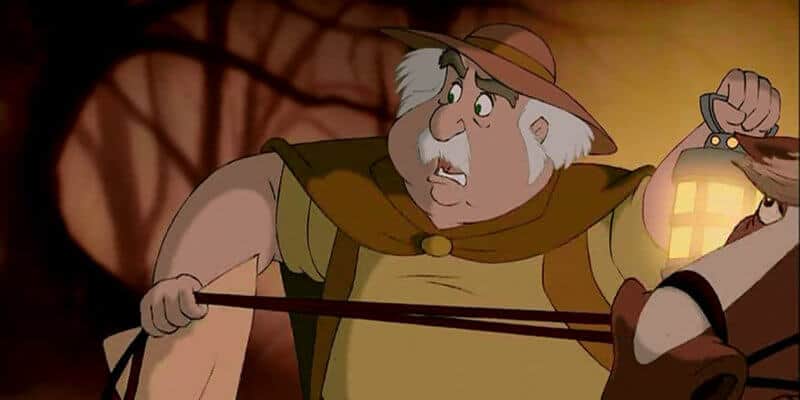 The “Disney Renaissance” was as successful an era as Disney’s animated films had seen since Walt Disney himself was head of the studio, creating classics like Snow White and the Seven Dwarfs (1937) and Walt Disney’s Cinderella (1950) — and the animators enjoyed every second of it.

In fact, the creative minds behind Disney’s famous animated feature films often included Easter eggs and references that can be completely lost on viewers until they’re specifically pointed out. One such Easter egg, it seems, can be found in Beauty and the Beast.

A TikTok user named Kara (@disneykara) shared a video that pointed out Disney’s animators appear to be poking fun at a rival theme park in a specific Beauty and the Beast scene. The captions on her video read in full:

I just learned about an Easter egg in Beauty and the Beast that’s so interesting…and, is possibly Disney throwing some shade!?

So here’s this part where Maurice is finding is finding his way in the woods and he comes to these signs where you can’t really see what’s written on them.

But it turns out the lower sign actually says Anaheim, which of course is where Disneyland is! What a cool Easter egg, right?

Philippe wants to go the way the Anaheim sign is pointing.

Maurice wants to go the Valencia way, which is kind of dark and scary, and the Anaheim way is bright and lovely.

They end up going the Valencia way, so I thought, “What’s in Valencia?”

You can watch the full video, including the scene in question, below:

Who knew this? #beautyandthebeast #disneyeasteregg

However, it’s not exactly true that this hidden detail was originally included in the film because Disney wanted to poke fun at Magic Mountain, although many fans interpret it that way. What else is located in Valencia? CalArts! The school was founded by Walt Disney and his brother, Roy, and has trained many of the most beloved animators and filmmakers who went on to work at Walt Disney Animation Studios and Pixar Animation Studios.

So, the “Valencia” Easter egg is said to actually be an ode to CalArts, where so many Disney animators studied, including the animators who worked on Beauty and the Beast as well as the film’s director Kirk Wise.

But still, the coincidence that CalArts and a rival amusement park are located in the same city isn’t something that fans can ignore! Either way, Easter eggs like this are hilarious to find.

The 1991 Disney’s Beauty and the Beast animated movie tells the classic fairy tale story of Belle (voiced by Paige O’Hara) and Beast/Prince Adam (voiced by Robbie Benson). Other voice talents in the popular Disney movie include Angela Lansbury as Mrs. Potts and Jerry Orbach as Lumiere.

The official Disney+ description of the one hour and 29 minute animated version of Beauty and the Beast reads:

Join brave, independent Belle on the adventure of a lifetime as she sets out to rescue her father — and discovers the enchanted castle of a mysterious beast. Enjoy this timeless tale overflowing with unforgettable characters and music you’ll never forget, universally acclaimed as one of Walt Disney Animation Studios’ finest features.

You can also catch the live-action adaptation of Beauty and the Beast (2017), starring Emma Watson as Belle, streaming on the Disney+ platform anytime! The new Beauty and the Beast is known for its spectacular costume design and for providing Disney fans with more of the young prince’s tragic backstory before he met Belle.

What do you think about this hilarious Disney Easter egg involving Belle’s father? Tell us in the comments!